· Registered
Joined Aug 14, 2017
·
2,175 Posts
Hi guys, I just serviced our JUnit 24" Expert fork and figured I'd share the experience. I didn't video the whole thing but the documentation is solid and I'll fill in the gaps. So far the servicing has REALLY made it awesome. Our fork had two seasons on it and it was really hurting for a service. It took me a couple of hours but was pretty easy. 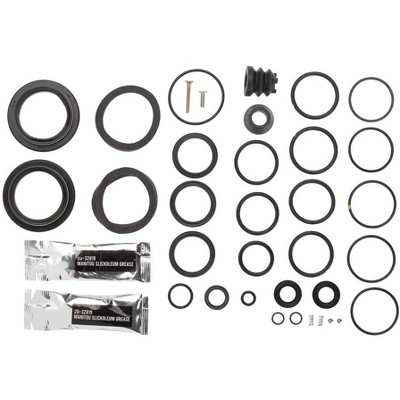 I had almost all of the basic tools (listed in documentation) but needed a few extras and found them cheaper and manitou's custom kit:

Tool Notes: NOW...the 8mm socket I purchased wasn't thin enough to fit down into the lower when unscrewing the nut at the end of the rod. Manitou's is way thinner. You can get their specific tool kit below and maybe it works better (FYI you don't need the cassette tool part unless you have the IRT version of the fork, not the expert). Regardless I didn't need it and made due without it, more on that later. Also you'll want some syringes with tubing to add and remove cc's of oil. DescriptionThis tool kit provides you with the specialty tools required to service all 34mm and 37mm forks. Each kit includes our modified cassette tool required in removing dampers and air springs from the stanchion tubes, a thin wall 8mm socket to remove the lower legs of any Expert air or...

Oil: I used Fox 5wt /w Teflon Oil for the damper 20$ a quart I think. Viscosity on the charts is supposed to be very similar to the Motorex than Manitou calls for. Manitou confirmed that this was fine. That's the same oil I used in my Grip 2 damper on my Fox 36. I used Caster Synthetic 5/40w 10$ motor oil for the semi-bath. That's what works I'm told. Don't get something with any detergent in it.

General Service Notes
So there it is, better than new. Its really awesome that this fork is so well supported as I've got more than one kid and it needed it badly. The other forks we've had that Spawn/trailcraft/prevelo use had no documentation at all and didn't really get better with servicing since the damper was a spring sort of. The JUnit stuff is so far beyond the competition and the servicing support of it is just another example of that. Hope this helps, feel free to ping me with questions.

· Registered
Joined Jan 23, 2004
·
12,552 Posts
I'm not going to agree on your wet sanding. But one way to reduce friction on these forks is to undersize the main air piston seal. This has trade-offs, the fork may stick down in the cold and your seal won't last as long before it needs replaced.
Simply take the main air piston seal and fit the next size down. It stretches thinner which reduces squeeze on the seal and makes it slide easier.
S

· Registered
Joined Aug 14, 2017
·
2,175 Posts
Thanks for the comments, always great to hear from the expert! Fwiw the wet sanding was recommended by Manitou product owner, apparently that's what they do for their sponsored riders. I don't have any opinion, tho I did it. Wet (very wet) sanding with 1500grit is def more of an automotive polish type thing than hardcore sanding by any means. Apparently if done very lightly it has an impact (I was told) to remove irregularities out of the shaft and stanchions. The fork is pretty damn smooth now that's tuned up and lubed. I feel like there was a tiny bit of mid-stiction in the past (when it was still newer)...however there is NONE of that now. Likely just the service and grease but maybe the sanding/polishing helped. Fwiw I even have to service my Fox forks immediately when they are brand new to get all the excess grease out (pretty nutty).

Very interesting on the piston seal! How cold are you talking about and does it just stick at first or frequently? We ride in 40-50d F often here in the PNW but not usually freezing temps. Is there anything else I can do to the fork? Its just the Expert version, not the newer Pro version with the updated lowers etc. Wondering if there is a better airspring or anything else I should/could do.

My younger guy (6yr) has the 20" on his hardtail. Its running really lower pressure but seems to work really freaking well but any tips on getting that to work better are welcome. I did tune the amount of travel via "attaching a shock pump and pressing the fork into the lowers" in effort to reduce travel by 20mm-ish. I assume that's ok.
R