Joined Aug 25, 2003
·
15,722 Posts
This evening after work I was looking for something non-political to read, and came across a piece about aggression and danger (toward dog mushers) on the Iditarod trail.


It put me in mind of something that happened to/near me on that trail ~10 years ago.


I wrote about it back then but for some reason it didn't resonate. I went back and re-read it tonight and I still don't quite understand why it didn't land with more of an impact. Too unfocused perhaps. Too little context maybe.


Here's a cut and paste. The first few paragraphs sort of set the stage. The middle and last several paragraphs are what's important.


For the first time in almost a week the temps dropped sharply overnight and although I slept great and woke comfy, stepping outside the tent made me instantly realize that I needed an extra layer NOW. 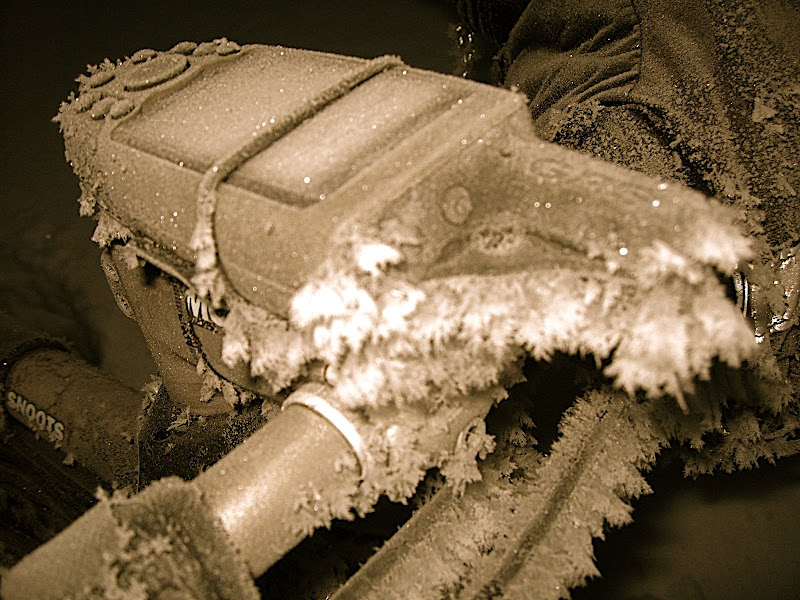 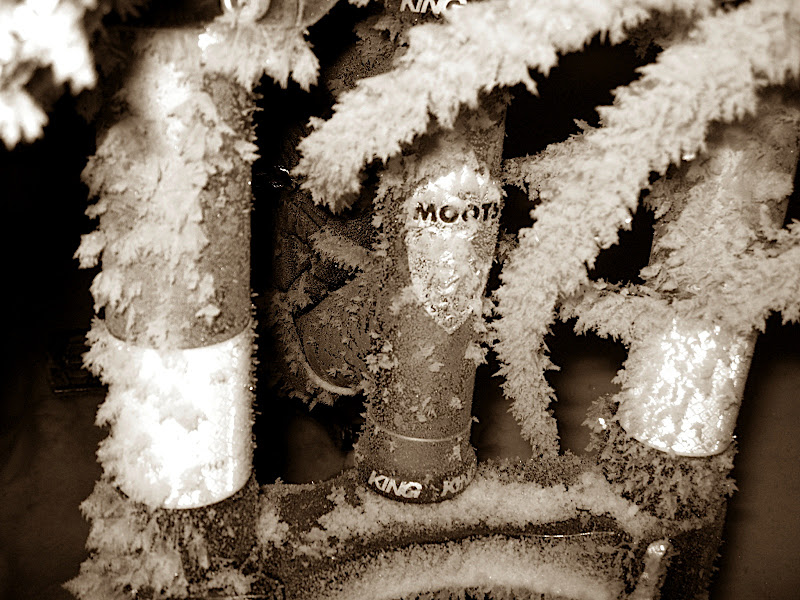 Layer added and gear stowed, the obvious benefit of the cold temps was a firm packed trail. I was stiff and sore and didn't have much gas in the tank, but being able to pedal a bike at 7+ mph gave me a little extra oomph and I covered a few miles pretty quick.


Approaching Galena I noted a shape shuffling ahead on the trail which slowly resolved itself to be Tim Hewitt. 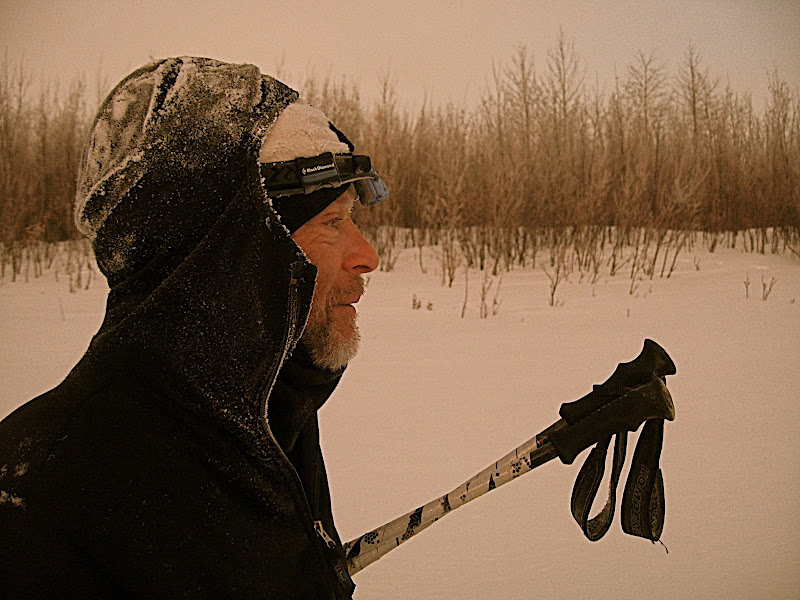 Tim had passed me as I slept then bivied on the river for a few hours. His voice was cheerful but his body english was in full-on beat-down mode. There are no words to describe the respect I have for Tim (or anyone else that has made this trip on foot). The simple fact that every step is earned and coasting doesn't happen is a big part of it, but when you factor in that he doesn't have a bike to lean on (when riding or walking) and has to drag instead of roll his gear, you start to get a bit better appreciation. What Tim is doing is levels harder than what I'm doing. No comparison.


We chat briefly but Tim chills off quick and needs to keep moving, so I trot/walk to try to keep pace and chat a bit longer. We've both been living inside of our own heads long enough that conversation is labored. The most important of what we share is that yes, last night's aurora was indeed one of the most silently intense experiences either of us have had the luck to witness, and no, neither words, video, nor pictures could ever do it justice. We wonder aloud how many other humans (2? 20?) in the entire Arctic witnessed what we did last night. We smile at the idea that it may only have been us.


The trail pops up off of the river into Galena, then continues along a local ice road through town then out to the airport before resuming as a trail. Rolling back down onto the river I expect the same soft, slow slog that I've had for the last ~week, but am pleasantly surprised to find the hardpacked trail continues. 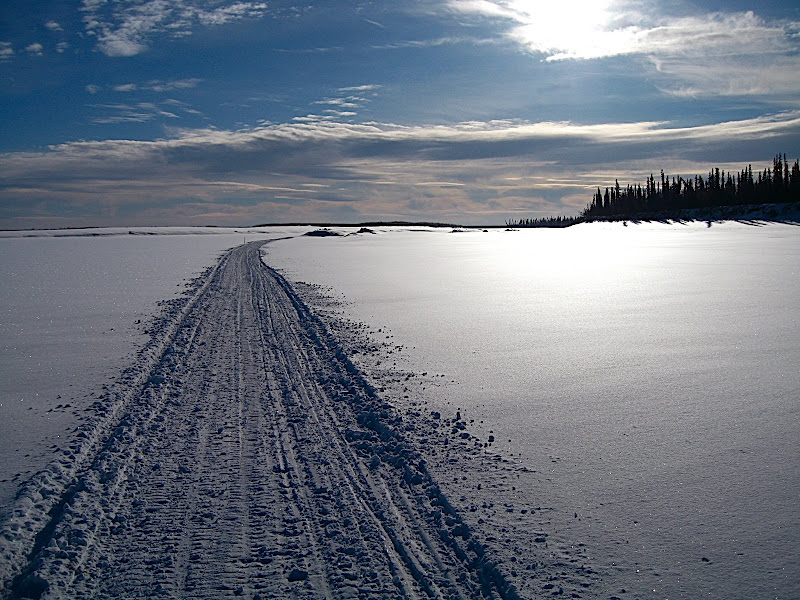 For the next ~two hours I motor westward, comfy zipped inside my windproofs but aware of the pervasive chill caused by the negative temps as well as the sharp breeze kissing my right cheek. The trail angles first N, then NW, and eventually veers due west. On this last trajectory the wind is just *slightly* behind me, and the GPS reports a solid 8 mph average for over 40 minutes. Unprecedented speed (!) since leaving Knik.


Before I can really enjoy or savor that speed, however, Bishop Rock comes into view and as I round the bend nearest to it, the low ridge along the north bank that has protected the trail from the brunt of the wind tapers down to meet the river bank. At the exact spot where that ridge ends the trail is drifted over. Bubbye 8 mph, hello 1.5. Gah. 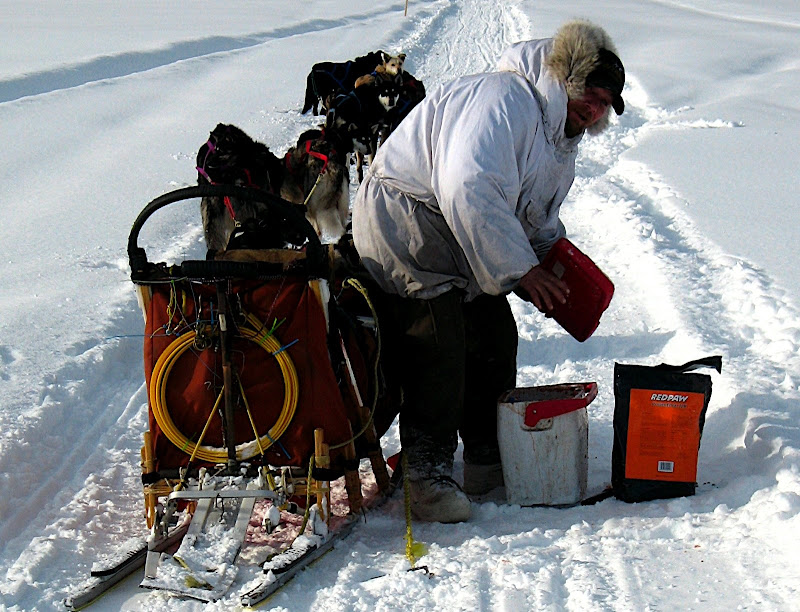 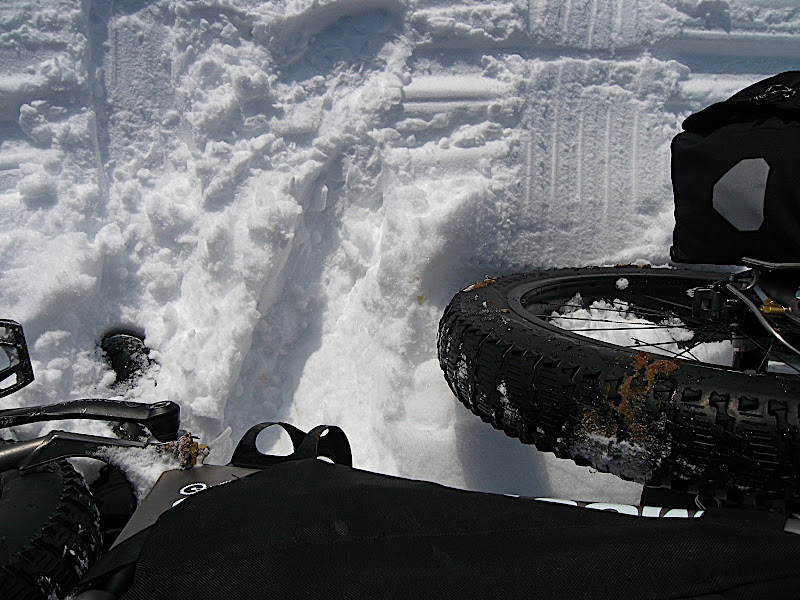 I walk through the morning, impatient longing for the firm trail goading me into trying to ride anywhere that the platform is even marginally firm. I waste lots of energy but make no real headway other than when plodding afoot. By early afternoon the trail is so drifted that I resign myself to walking indefinitely. 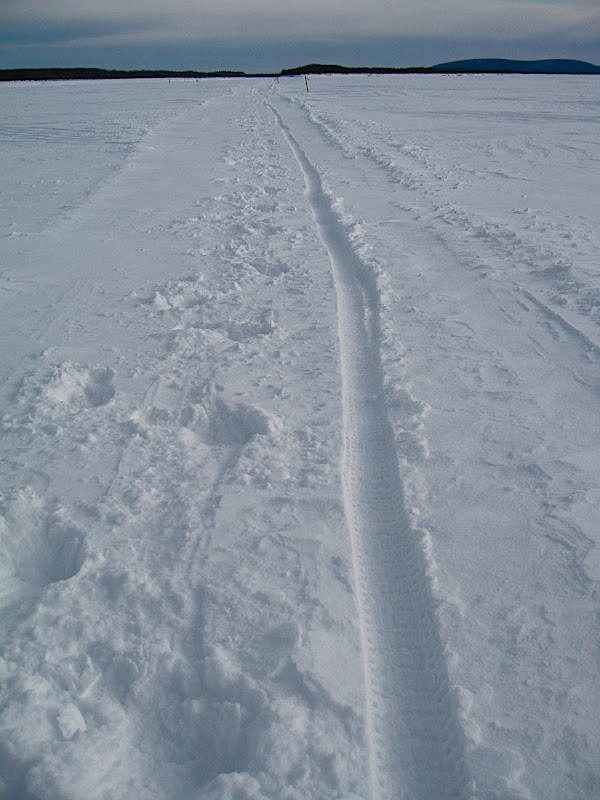 Because the main pack of the dog race is traveling down the river today, there are herds of locals out on snowmachines to spectate their passage and cheer them on. As the afternoon winds on and more and more machines pass and engage me, it becomes clearer and clearer that spectating the race is a good excuse to tie one on. For the most part I'm greeted and chatted up by group after group of 'happy drunks', offered sips from countless bottles or flasks, and invited to join bunches of informal gatherings along the bank, the biggest of which has congregated around a bonfire burning into the snow near the Koyukuk summer fish camp. I laugh uncomfortably at the increasingly aggressive and derisive jokes tossed in my direction, unwilling to incite the jokers further but unable (due to my slow rate of speed) to get out of range or sight quite fast enough.

The hours pass faster with the increased anxiety.


Near sunset a snowmachine slowly catches up to me, notable because the driver lurches forward for a few seconds at a time, pauses for a few seconds and even stops, then hammers the throttle again. Following each acceleration he slowly eases off the throttle and comes to a stop, pauses momentarily, then hammers it. Because he is on a parallel trail I'm not terribly concerned about his erratic driving, but I *am* curious. Just can't quite figure out what the hammer/pause/hammer routine is about. As he pulls abreast, perhaps 40 yards to my right, I get to see and understand exactly what's happening. The accelerations come during his awake/alert moments--his eyes are open so he punches the throttle to get himself closer to home. Then he effectively passes out, chin bobbing down to touch his chest and hands falling from the bars into his lap. He leans precariously, perhaps unconsciously fighting to stay upright, then his eyes open, head rolls ~upright, and he grips the bars and punches the throttle again.


This goes on for several minutes until he pulls far enough ahead that I can't hear the machine, can only see his taillight brighten each time he hits the gas.


I make a mental note to pick a protected spot when setting up camp tonight.


Sometime after full dark a machine approaches from ahead. My headlights are both on high even though little light is needed to see the trail, and I'm relieved when it veers off the main track to pass before getting too close. But instead of passing the driver comes to a stop and kills the engine, offering me a pull from his pint of huckleberry schnapps before the machine is completely quiet. I hold up a hand to politely decline, he responds by taking a quick nip then stashing the bottle inside his chest pocket. The next few minutes are spent with him talking rapidfire about whatever idea comes into his head. He insists that all of the human powered racers have quit, frustrated by the conditions and nagging injuries. He knows this to be true because he claims to have personally taxied Jay and Rocky "and lotsa others, ya" to the airport at Galena. I perk up a bit at this, aware for the first time that others might be suffering or demoralized as I am. I ask about Carl or Pete and he insists that 'they're all gone, all of 'em, you're the last one on the river...". I'm skeptical but before I can think of a way to get verification he changes the subject to wolves.


His tale rambles and I'm not entirely certain that I'm following all the twists and turns. I gather loosely that a week or so ago a pack came down from the hills to the south, napping along the bank in the heat of the day then rousting themselves to cross the Yukon as the last light faded. He and his cousin were sledding home from the nearby liquor store (a story unto itself, and the reason for the volume of traffic as well as the drivers' oft-impaired state...) when they caught sight of the trotting canines and gave chase. As his yarn wandered on I found my heart racing, cheeks flushed, and hands tightly clenching the handlebars. He said that they'd chased the wolves for almost a mile (no animal can outrun a snowmachine in soft snow, meaning that the wolves' hearts and lungs were probably near to exploding) before his cousin took the lead and ran over the slowest straggler. His voice rose and his excitement was palpable as he leaned toward me to share the ultimate moment:

You shoulda seen it! Shoulda been there!


Unable to contain my anger and confusion I stomp away as fast as I can. Hyperventilating, incapable of rational thought, increasingly afraid of how I might react if forced to listen to any more.


Some time later, deep into the evening, I walk along exhausted from the plodding but equally spent from the uncomfortable realizations I've come to. Modern Alaska natives face an uphill battle in so many directions, constantly battling unemployment, alcoholism and errant substance abuse, as well as maddeningly conflicting pulls from their rapidly fading subsistence past and a far more compelling and exciting modern present. Nothing in their feast-or-famine past has taught them how to cope with unrestricted access to booze, nor have they any reason to heed the sobriety warnings of the non-native teachers (read: outsiders) that have seen the big picture.


If his tale is to be believed I can only guess that it is no longer an uncommon story. While I want to take the easy, obvious route of condemning him for his actions, ultimately I cannot bring myself to pass judgement. I'm human too, and there's no guarantee that, when faced with his reality, I'd choose any more wisely.


(Required reading for an inside, in-depth and shocking-but-not-for-the-reasons-you'd-expect view of the modern Alaskan native's conundrum: Seth Kantner's "Ordinary Wolves").


Over the last hour of walking I head due south, following the main, broad channel of the Yukon toward Nulato. Lacking energy to posthole the bike ~1/2 mile off the river and up the bank into the protection of trees, I pluck one of every ten Iditarod trail stakes and stash them on the Snoots' rear rack. After a few miles of this I have a sizable hoard. I drag the bike ~30 yards off the main trail, then use the stakes to form a stockade of reflective-topped "X's" in the snow, inside of which I erect the tent. As I'm kicking in the tent anchors a pack of 4 machines roars up. They slow enough to shout unintelligibly in my direction, one of them lobbing a can of Keystone at my feet. Two teenage girls, holding tight to the drivers in front of them, giggle uncontrollably as the machines race away.


Supper is a somber and anxious inhalation of hot but tasteless freeze dried goop. I quench the stove, click off the light, then burrow into the bag. 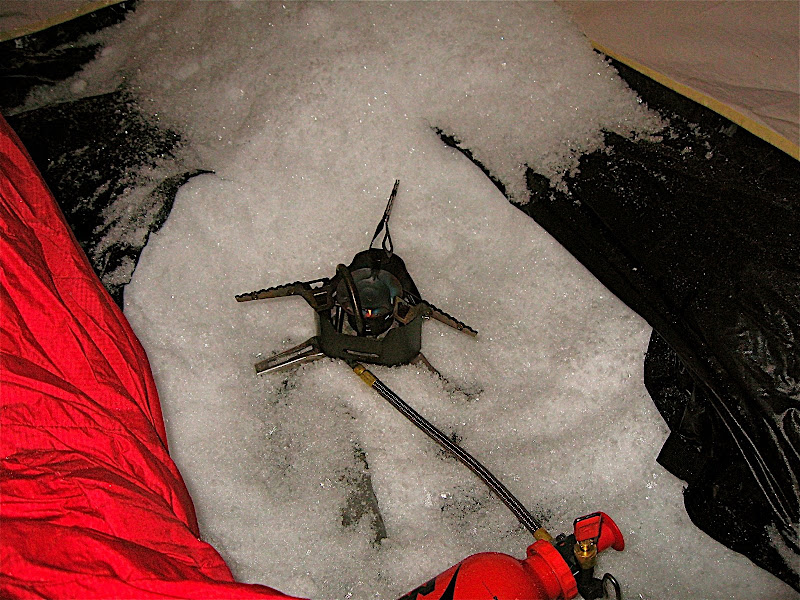 The night passes as a series of brief, anxious 'sleep' episodes, each abruptly ended by the imagined scream of approaching snowmachines. In reality not a single machine passed in the night.