Joined Nov 8, 2007
·
18,453 Posts
The other thread has some bickering going on, and another poster suggested that more specifically-categorized threads would be helpful. I think he was right.

I've posted this bike before, but what the heck. 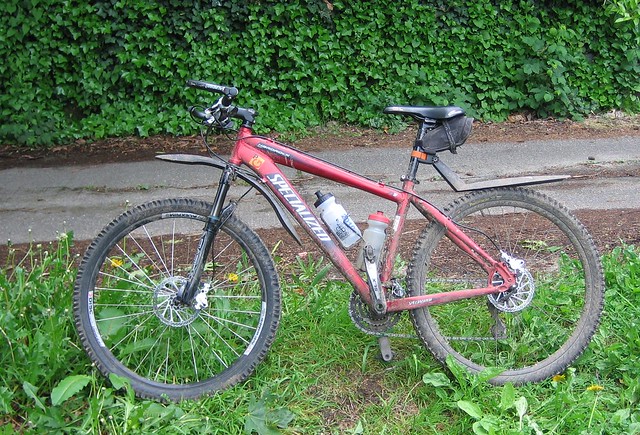 It started life as the '07 Hardrock Comp Disc, which retailed for $660, IIRC.

New parts:
Fork: '06 Manitou R7 Platinum, 80mm
Headset: Origin-8 something-or-other (not on yet in this pic)
Stem: FSA Gap DH, 90mm, sort of won it
Handlebars: Specialized XC flat bars, cut, thank you, with Profile bar ends
Grips: ODI Ruffian
Brakes: Avid Elixir 5, front and rear, 160mm rotors
Front derailleur: Shimano SLX
Rear derailleur: Shimano Deore Shadow, but in this pic it looks like it's still the Alivio, which worked okay until I fell on it.
Shift levers: Shimano Deore LX
Cassette: Shimano 9-speed 11-34, SLX I think
Chain: SRAM 9-speed
Crankset: Shimano SLX, 22-32-44, OEM rings and Shimano BB
Pedals: Time ATAC Alium
Front wheel: Some Alex rim on a really weird (but nice) Shimano hub.
Front tire: Panaracer Dart 2.2 SC, given me by a teammate
Rear tire: WTB Velociraptor Rear, given me by the same teammate, after I killed the tire that's on it in this pic.
Saddle: Bontrager/Selle San Marco 3D, bought it in 2000, thing's awesome
Other: SKS fenders, cheap bottle cages, a bunch of inner tube wrapped around the right chainstay, and some around the top tube since this pic. was taken.

I'm posting it in the 1k-2k thread because I've bolted way too much money to it. But, I'm very happy with the performance now - everything just works. (And for noobs reading this - unless you buy your bike first, then get access to team deals, this is an extremely inefficient way to have a nice bike. Save your pennies, and get it right the first time, or try and source a complete nice bike used.)

What's the weight of it, btw?

Blksocks said:
What's the weight of it, btw?
Click to expand...

Including the dirt from Tuesday, fenders and seat wedge with two tubes in it, about 33 lb. From my bathroom scale.

The frame and wheels are quite heavy. I don't care enough to get individual weights of things at the moment. The stock bars were shockingly heavy, so I assume the seatpost, which is stock, is also up there.

In short race trim, dunno. Ask me when the trails are dry. I have some lighter tires that will go on, the fenders will go into storage, and I might care enough to knock the dirt off and remove the seat wedge. I haven't tried to cut weight, although I think I have, some - the stock bars, fork and crank were all shockingly heavy. I've been chipping away at it at about one major purchase/year lately, so it's probably wheels next, then frame, and then maybe I'll get obsessive about the grams. Or I might get a complete, purpose built racer first.


Current parts (a few things have changed since then)


Current parts (a few things have changed since then)

I bought the full bike from Performance and really dig it, but my question is this: are you like 7 feet tall or something? Jeeze o' Pete!
F

Joined Oct 9, 2010
·
45 Posts
Heres mine ive built up from parts. spec below. i like to think its a decent entry / mid level hardtail setup. im just getting into MTBing and have bought all the parts used, inc frame. So far its cost me about £360, or $577. Just got rear derraileur, casette and chain to buy now, then done.

waterdude said:
I bought the full bike from Performance and really dig it, but my question is this: are you like 7 feet tall or something? Jeeze o' Pete!
Click to expand...

Started off as a stock 2008 Trek 6000 and upgraded the following parts:

Spent around $1200 after original investment and upgrades.I like to think that it was a pretty nice build up for what I paid.

What kind of tires are those, and cable housings? And whered you get them? Thats basically my dream setup (minus the color of the frame)

joshman108 said:
What kind of tires are those, and cable housings? And whered you get them? Thats basically my dream setup (minus the color of the frame)
Click to expand...

Front tire is a Kenda Nevegal 2.35 and the rear is a Kenda Small Block 8 2.35. The cables I am running are Jagwire. I got the hyper kit which includes 2 cables and more than enough housing. Also comes in many different colors too. I got them from my local shop but you can find them online, pricepoint, amazon, ebay, etc.

Joined Dec 25, 2009
·
183 Posts
$500 for the bike new, then replaced everything except the seatpost and frame as parts broke, wore out, or couldn't keep up with my riding. Here's the latest: 1x9 conversion and a ceramic BB. Sure makes a big difference having quality parts instead of the junk that came on it :thumbsup:

waiting on the mailman.hope to ride by the weekend. $1500 to ride ol sckool ti

Thanks, props on your's too. I like the racy look. Reminds me of a nice rally car or rice burner :thumbsup:

Was planning to get a new wheelset for this bike but then wound up buying my FS so at this point the new wheels will probably hit that bike and I'll hand down the stock DT X420SLs from that bike to the RH.

Probably going to throw some Speed Dial 7 brake levers and bigger rotors on it next time I find a good deal and have the money to spare.

Might do a bit of bling/WW stuff to it as well (seat post, stem, handlebars, anondized hardware bits) if I find myself w/ an excess of cash, but it works pretty well as is aside from the wheels.
B