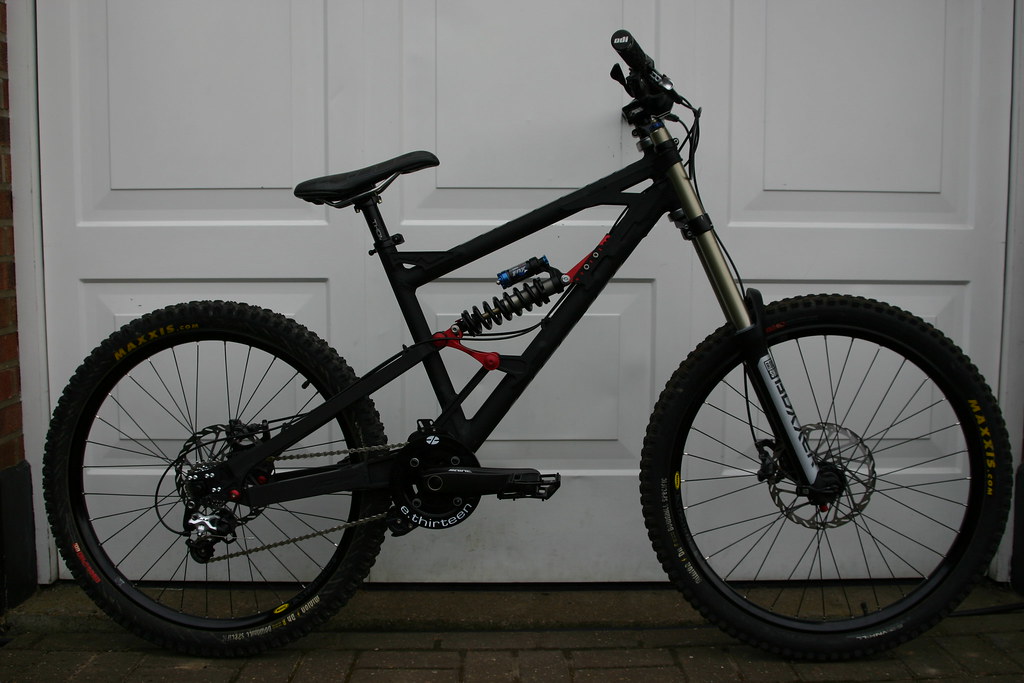 Decided that I needed a tough bike, but not one that weighed a complete ton. If it's not me, then it's the bike that I break.

It weighs 44lbs, which, coming from a 224 hurts a little, but I needed something a little more robust. The build isn't exactly light, so you could get something just under the 40lbs mark. Everything is spec'd to outlast a nuclear war, without getting too stupid.

Wanted something a little different from the current crop of the options. It's been a long time in the coming, planning, and most annoyingly, the building (10 week wait for the frame).

Wondered what you all think?

Joined Apr 5, 2008
·
32 Posts
sweet bike mate, the rear triangle definitly looks nuck proof. I like that you havent gone for too much colour to complement the Stealth black finish. The welding is something else.

Do you have the longest fingers in the world or havnt you tunned your brake levers yet?
S

Yep, overkill on pimping is just that, 'overkill'. I think it looks better being more subtle.

And yes, I've yet got to adjust a few things. Just put her together really. And my fingers are quite long, but those levers do have to come in. Chopped three of them off a few years back (the surgeons sewed them back on) so one or two are a little shorter :thumbsup:
P

Joined Dec 30, 2005
·
51 Posts
As a matter of curiosity I quickly put together a comparison piccy to show Pauls New ION against my UFO. 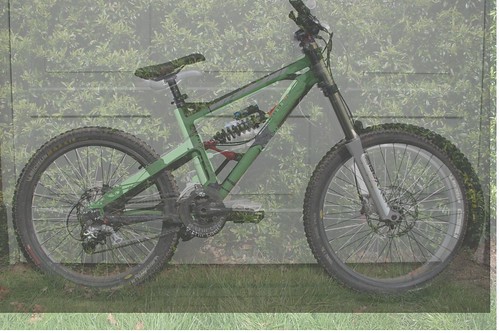 Looking pretty similar with these builds. My long 888s evening up the headangle, the ION appears a tiny bit longer and lower. Top tube on the UFO puts the saddle very slightly further back.

I need a smiley :thumbsup:
T

Joined Mar 31, 2006
·
1,521 Posts
Nice looking rig mate and I love the black attack colour. Those pedals look enormous! What are they?

What type of riding u doing with it? Are u racing?
P

Karve said:
Nice looking rig mate and I love the black attack colour. Those pedals look enormous! What are they?

What type of riding u doing with it? Are u racing?
Click to expand...

The pedals are Funn Slowjam Vipers. I have size 12 feet and small pedals can result in the odd unintentional no-footer when hitting big jumps. Not much fun!

I'll do a few regional races, and I'll take the bike out to the Alps over the summer and race the Mega again. Not the best bike for it, but I can only take one bike with me and I love downhill mostly. I'll use it for just about anything over here in the UK. I downhill on a hardtail, so why not swap it the other way round
L

Some questions about your build if I may ask: have you tried Burgtec pedals and how do they rate? Would Mavic 721 rims be ok for a lighter DH build? How do you rate the Hope hubs over say Hadley?

I am just putting a light Helius ST build together with a single crown fork so the above would be useful to know. Will you post your ride experience? Thanks.
P

I'll start with your questions:

No, I've never ridden Burgtec pedals. The closet I've got is replacing that D2 stem for a Burgtec integrated one three days ago!

721 would be fine for a light DH build, on paper. But it all depends on how you ride. What is your track record on wheels? I've broken three 729s in the past nine months, and four of those months I've been off the bike injured :thumbsup: I know people that ride them for DH and get along fine. I go big and I go hard. I need tougher wheels.

Never ridden Hadley hubs, so I can't comment. But my Pro II hubs have lasted me over two years and all I've had to do is replace bearings, as you would expect. The freewheel is going as strong as it did on its first day. And considering the way I treat wheels, it's a miracle that they still work.

And the Ion? Well, I was terrified that riding a heavish, linier bike would just be awful in the air. Even though in downhill you spend most of the time with wheels on the ground, I'm only really comfortable with a bike when I know how it's going to react in the air. So I'm absolutely delighted to say that it jumps amazingly! It was so balanced in the air that it was unbelievable. First jump I hit on it, it just sailed over, front and back end level until I nosed it in. It whips, tabletops, hips and just generally pops up over everything, be it roots, rocks, drops or kickers. It manuals exceptionally well, too. It just loves sitting on its rear wheel. On the downhills I'm still trying to work out how it fairs - but don't get me wrong, it's excellent. I used to ride an Orange 224, so I'm always going to be comparing it to that. It doesn't corner low berms as well, but it's not 'that' much different. Over rough stuff it's smooth. Very smooth. It goes through the first bit of the travel nicely, just snapping away at the little hits, and when it becomes time for the big hits it just sucks them up, never wallowing in its travel, and then it takes another one as it's rebounding, fully in its stride.

But I'm yet to get it on a five minute downhill track to give it a really proper test. That's for Scotland in just under three weeks. I'll report back then how it's doing.

It's reassuring to hear about the Hopes and it sounds like the 721 might be ok for me to begin with, since I am just getting into DH. Thats why I went for the Helius ST, so I could use it mainly for DH Alpine runs and some trails stuff with a double ring set-up. With some more experience, I will definately consider the Ion ST for a DH specific bike in the future.

I think your Ion ST must be the first one in the UK? I know Mike form Nicolai UK is currently building a white one with red levers and I hope to see that at Val Nord early June if I can make it down there? I will suggest to him that he posts.

Good riding in Scotland (where abouts?).

I spent two days riding it in Scotland down the trails at Innerleithen and I have to say that it performed very well indeed. In fact, for a 'World Cup Downhill' bike it is exceptionally friendly as something of an 'everyday downhill bike'. I can't put it more simply than that. You get on it. You ride down the hill. And it does a bloody good job of looking after you. It doesn't require any specific alterations to riding style like my 224 did. I don't know what else to say other than if you're in the market for a downhill bike and aren't too bothered by the weight (but seriously, there are MUCH heavier downhill bikes out there) I wouldn't recommend any other bike. Buy one.

Other than that, I crashed it on my third run and bent the mech hanger. Snapped it completely off at the start of the next day, wrapped my chain round the chainstays and made some of the black paint silver aluminum. So I'm happy to say that it rides chainless downhill rather well, too. Although that's one thing I wouldn't recommend.

Still jumps closer to a hardtail than a full suspension bike, too. Well, that's what I like to think

Decided that I needed a tough bike, but not one that weighed a complete ton. If it's not me, then it's the bike that I break.

It weighs 44lbs, which, coming from a 224 hurts a little, but I needed something a little more robust. The build isn't exactly light, so you could get something just under the 40lbs mark. Everything is spec'd to outlast a nuclear war, without getting too stupid.

Wanted something a little different from the current crop of the options. It's been a long time in the coming, planning, and most annoyingly, the building (10 week wait for the frame).

Wondered what you all think?

Oh ya, you have given me an idea how black anodised frame and red anodised detail on an Ion looks like and it's sweeeeeet. It's time to save up for an Ion man!

I bet with a ti spring, Boxxer world cup and some 823 and no-tubes you could be down to 40lbs or maybe even less. Set of new xt cranks and lg1 will def put you below 40

Either way, she is beautiful!
Thanks for sharin'