Joined Aug 25, 2003
·
17,242 Posts
I jumped at the chance to drive a few hours and reconnect with some old friends this week. Threw a bike and overnight gear in the toaster, plugged in some tunes and zoomed in a Gunny-esque direction.

Unsure of where Old Friend #1 was exactly, I ended up driving the entirety of Marshall Pass and down a bit of Poncha Pass before finding him grinding his way up the pave'. Whipped a uey and drove back a ways to get suited up before he came dieseling by.

Just great to ride with him for a few hours. Well, mentally great--physically it pretty much sucked. He's ~1600 miles into the GDR, and has obviously found his stride. Straight out of the car with no warmup I got positively killed for the first ~hour climbing Marshall Pass. It was difficult enough to just hang on, but eventually I got the idea to ask him questions that required detailed answers, and that slowed him down enough that I could settle into a merely agonizing pace. We chatted most of the way on subjects ranging from Shageluk to cheaters to saddle sores and ice cream. Not necessarily in that order. 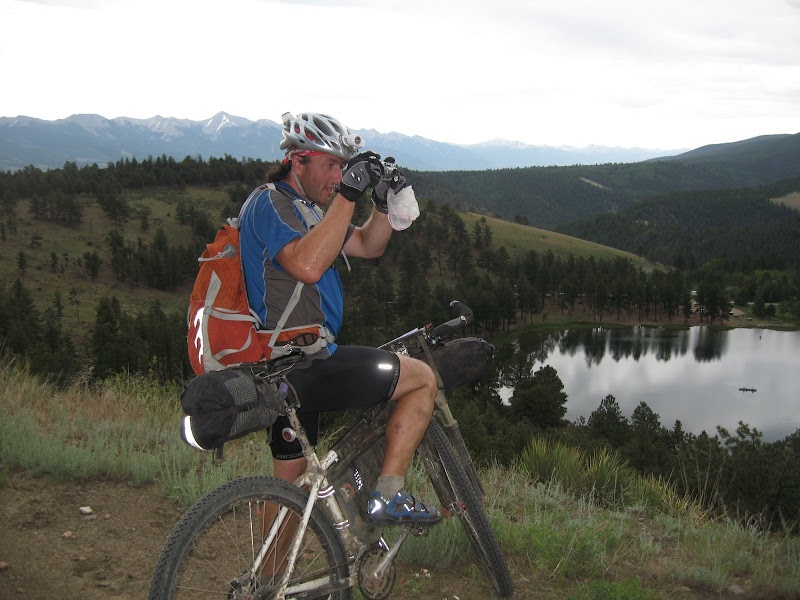 Hardly recognized him with his midsummer tan. Fishbelly white is his normal-to-me-in-February patina.

It rained for most of the last ~hour and then we split at the top at sunset. Seems a significant chunk of his motivation is merely wanting to finish so that he doesn't have to re-ride the same route. I've heard that sentiment somewhere before... 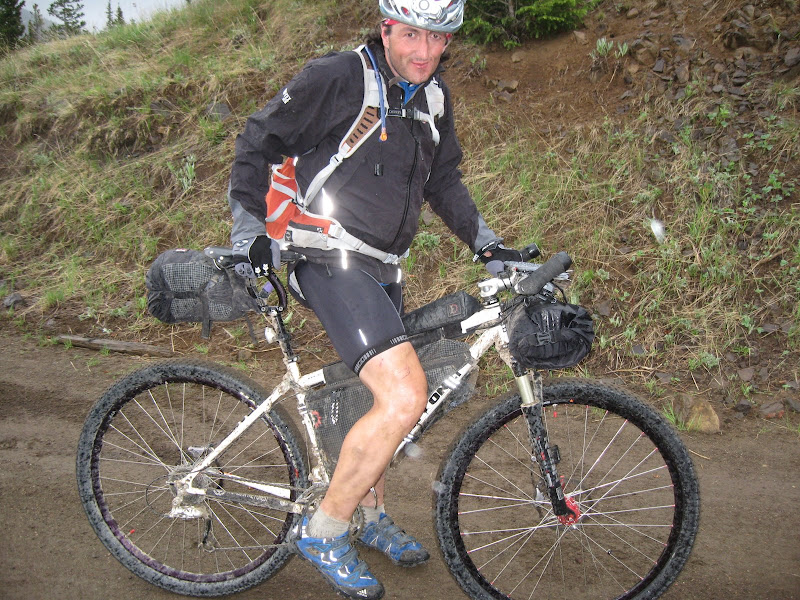 Some great quotes from him:
"This is a big damn country!"
"He's one of those filthy Europeans-you can't trust him. I know-I'm one too."
"I was just happy to be keeping up with a fit Jenn. Then I snuck out at 2AM to get ahead of her."

If you've been following the race the above will probably elicit a chuckle or two. If not, well, it really doesn't matter...

I descended and camped for the night, then made my way homeward the next morning. This day was different--I knew exactly where to find Old Friend #2.

Anyone that's lived and ridden near this small mountain town knows her as one of the first to open when the snow recedes, as well as one of the easiest to access. Not coincidentally she gets ridden a lot. 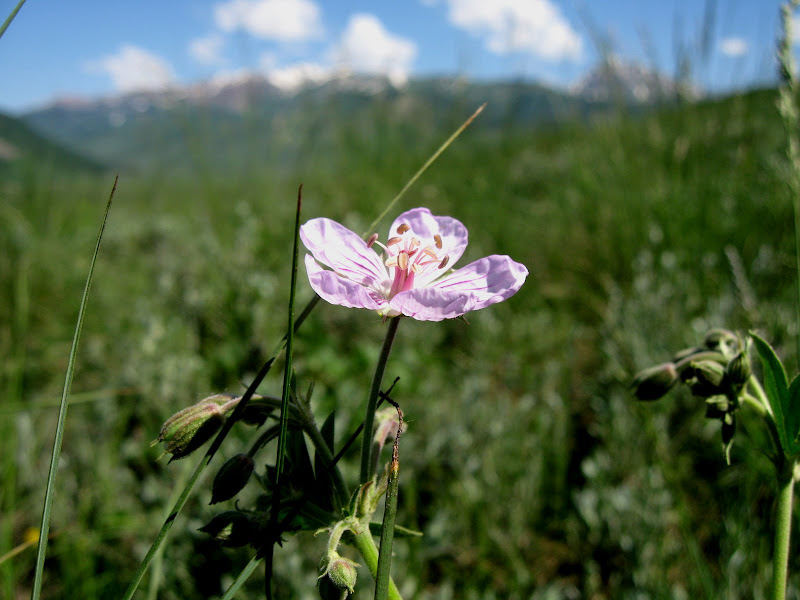 I've ridden her on hardtails and softtails, full rigid and full sus, as well as single speed and fixed. She's a quickie that packs a punch if you go out too hard, but she's always worthwhile because her rolling backside (ahem, descent) will make you grin regardless of how badly you cramped on the upswing. 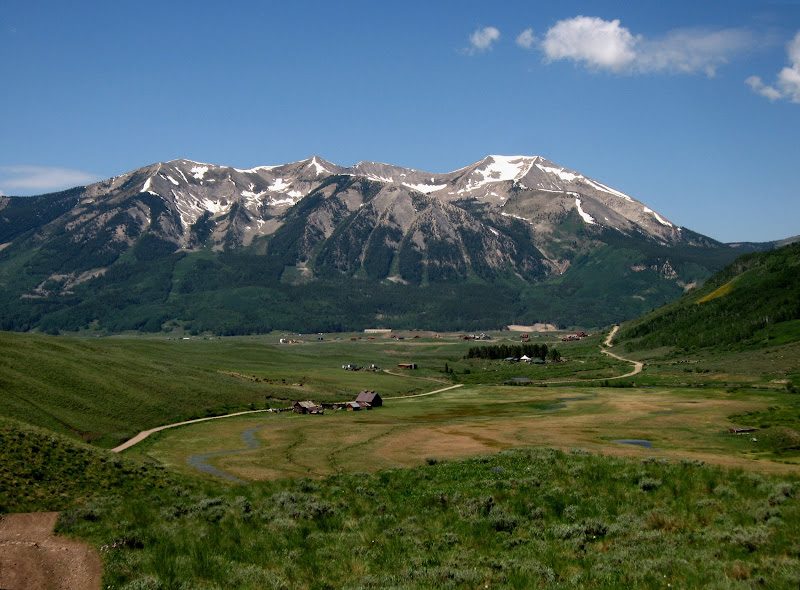 I couldn't climb fast in all the years that I was paid to do it, so now that the paychecks come from wheelbuilding I rarely even make a token effort to hurry uphill. Slaving and suffering has been replaced by gawking and ogling, a tradeoff I'm so comfortable with that I've supplemented it with a camera to give me all the more reason to dawdle. 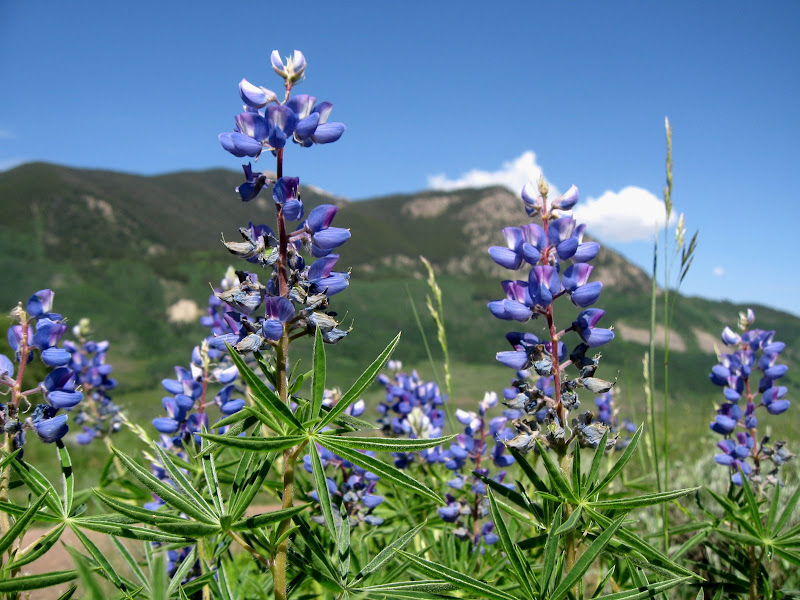 And dawdle I did. Further rationalizing my geologic pace I told myself that it would be downright rude to rush through a rare meeting with such a fine old friend. 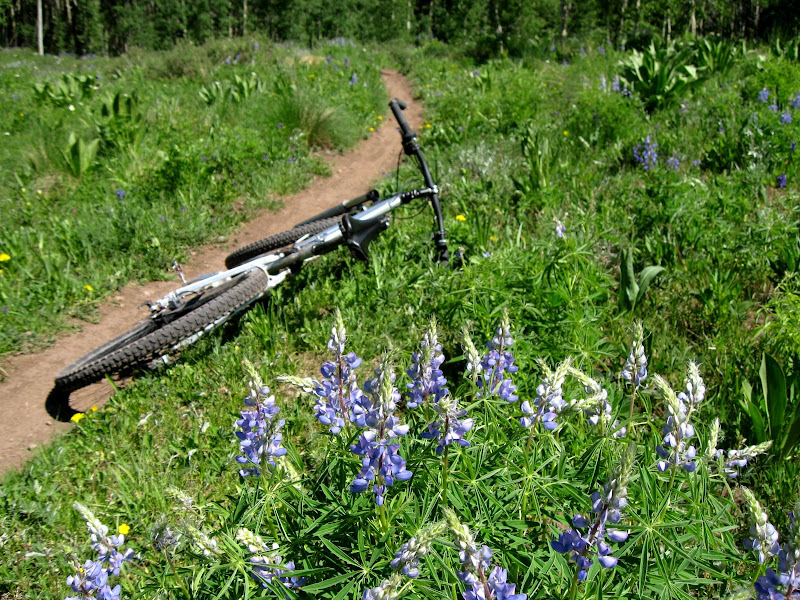 I've ridden her fast dozens of times, but I can't remember a single slow cruise. 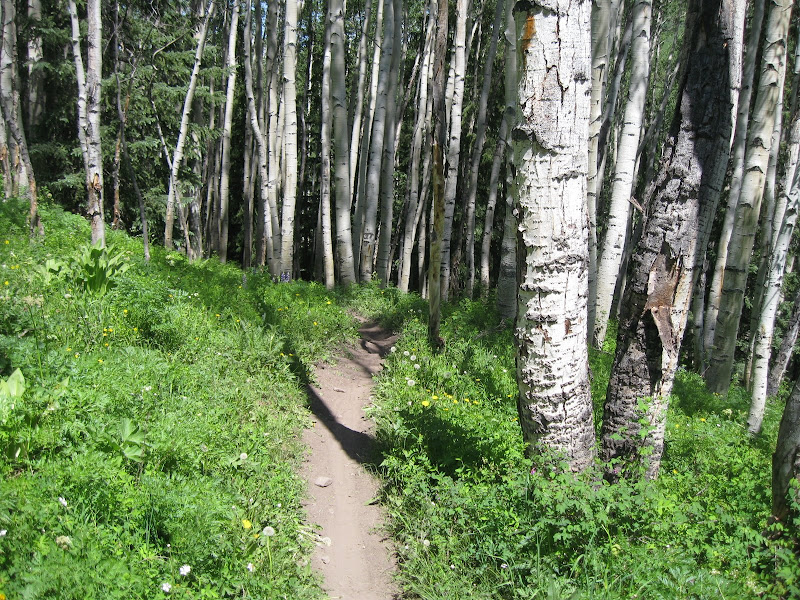 Not that I needed a reason but it was reason enough to take my time and really savor the surroundings. 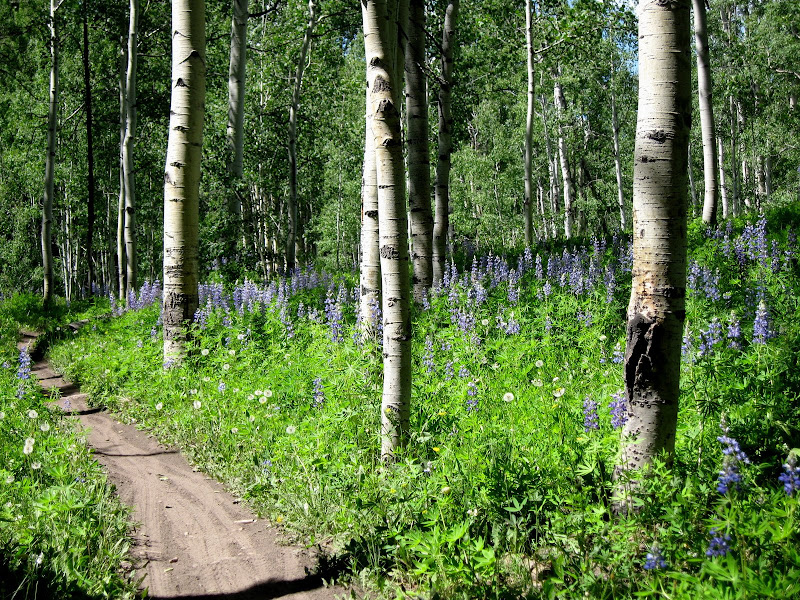 Not surprisingly, taking time to shoot some pics meant that I was getting a spell from the climbing and keeping my accumulated heart rate and fatigue pretty low. Sections that I remembered as technically challenging were emphatically not. Hmmm. 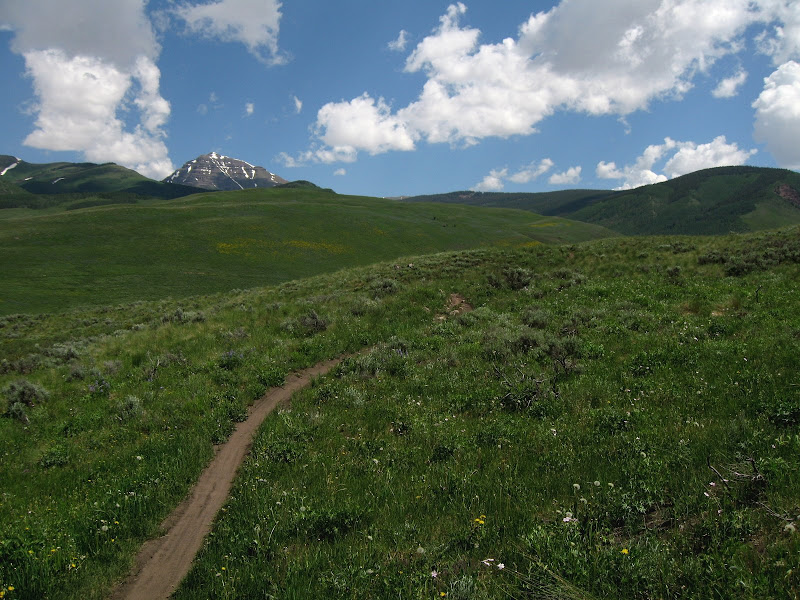 Huge amounts of winter snow have finally vaporized and left equally huge numbers of flowers. I could live here a lifetime and still, each spring, insist that the flowers were better than ever *this* year. 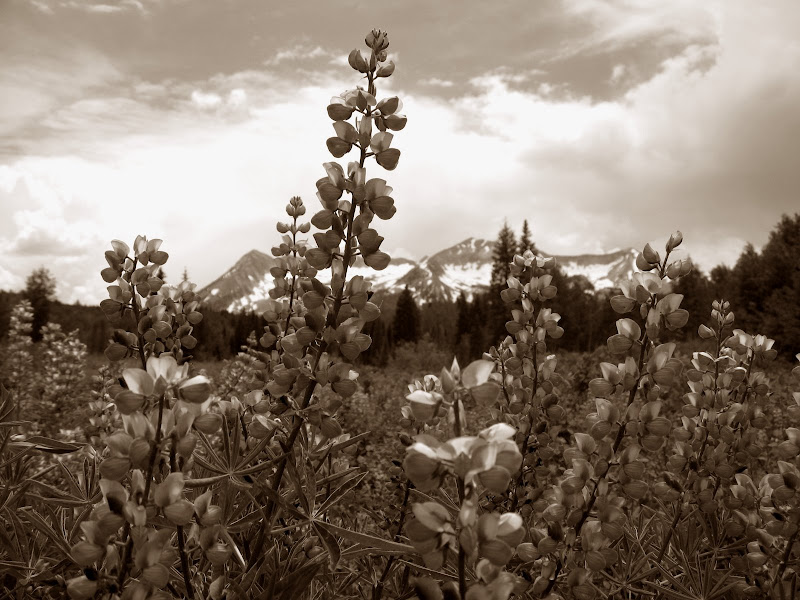 Cresting the top I grabbed a handful of gears instinctively--time to fly. But I just couldn't get into character when descending either. Not as fun to push without a wingman? Or just being considerate of 'her' feelings again? 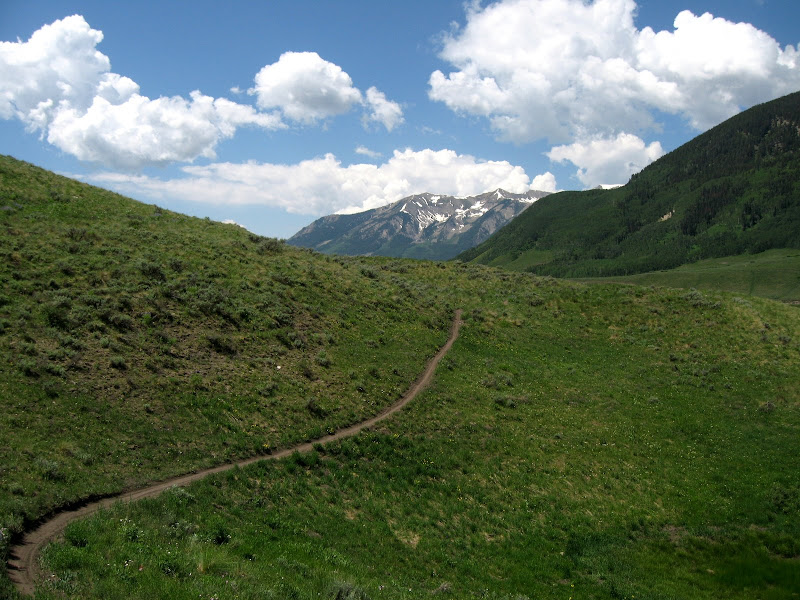 Meh--didn't really matter why. Honestly I think it was difficult to even notice the trail for all of the flowers and views. 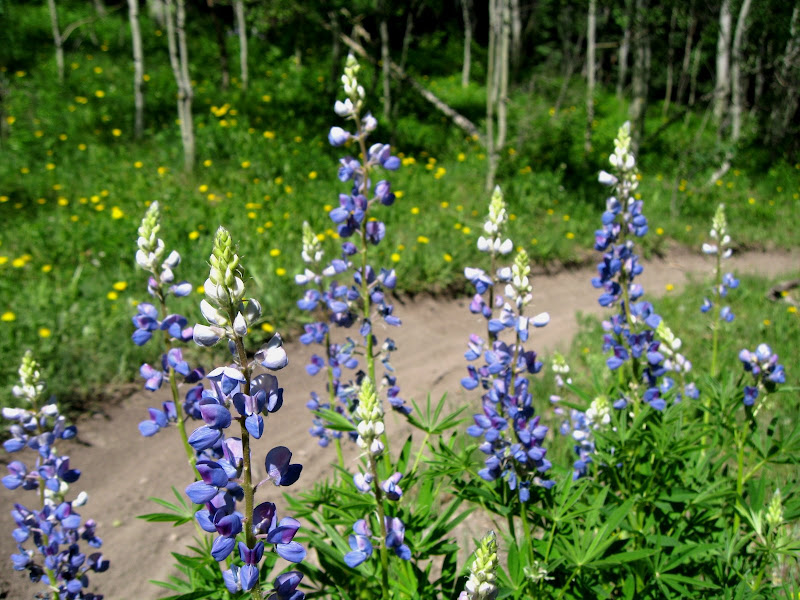 Re-reading that last, I can only think "God I'm getting old". 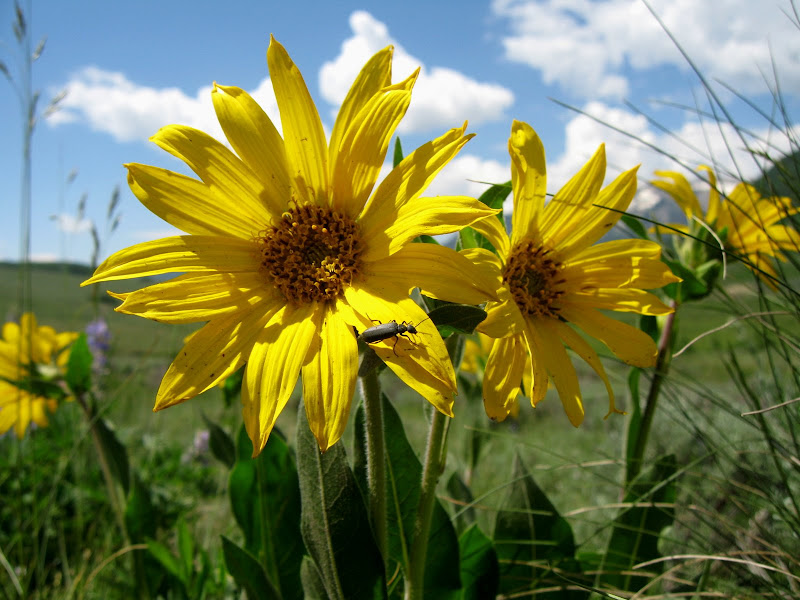 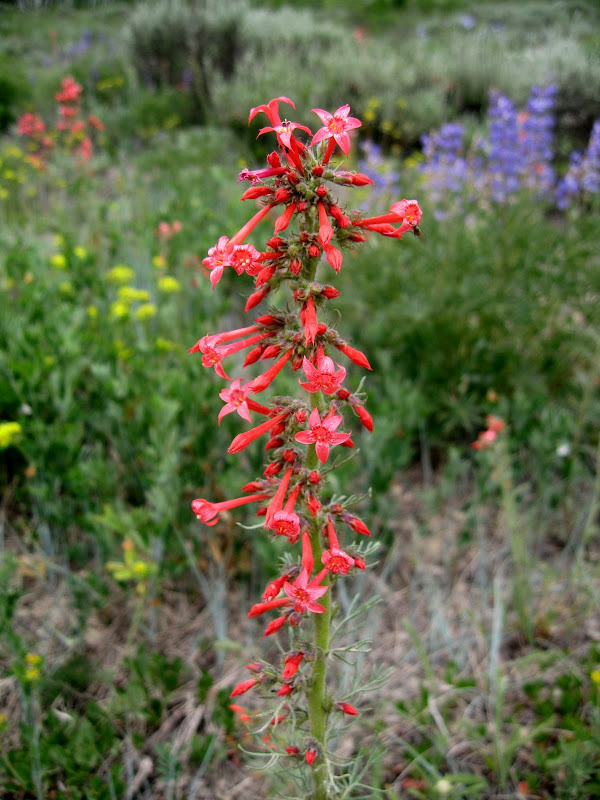 At one sweeping corner I stopped the bike and rotated to look back, realizing that although I'd been here dozens of times I had *no clue* what I'd see if I turned around. 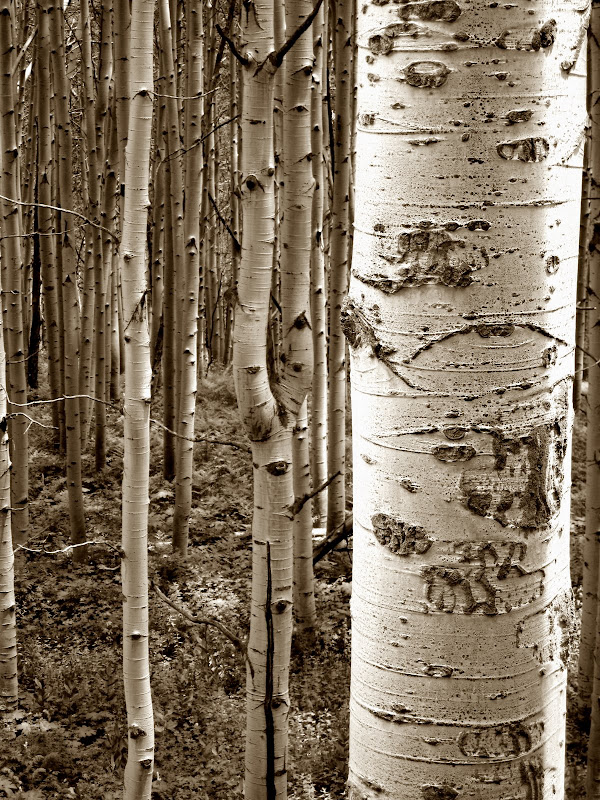 Acutely aware of a growing confusion in my noggin, I stopped yet again to ponder why I was here. Am I supposed to be going as fast as I can? Should I be stopping to look around? Which will I tell all my friends about afterwards? Am I supposed to clean the climbs while staring at my front wheel, or walk the climbs while looking anywhere else? Gad--am I even allowed to walk when I have a fancy-shmancy wheeled conveyance along? 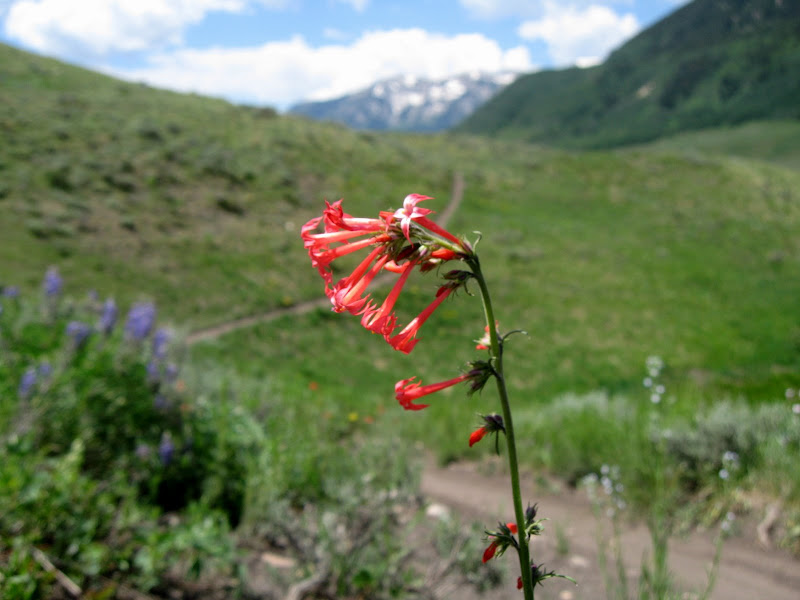 'Round about here I got a bit of a headache and needed to lie down. 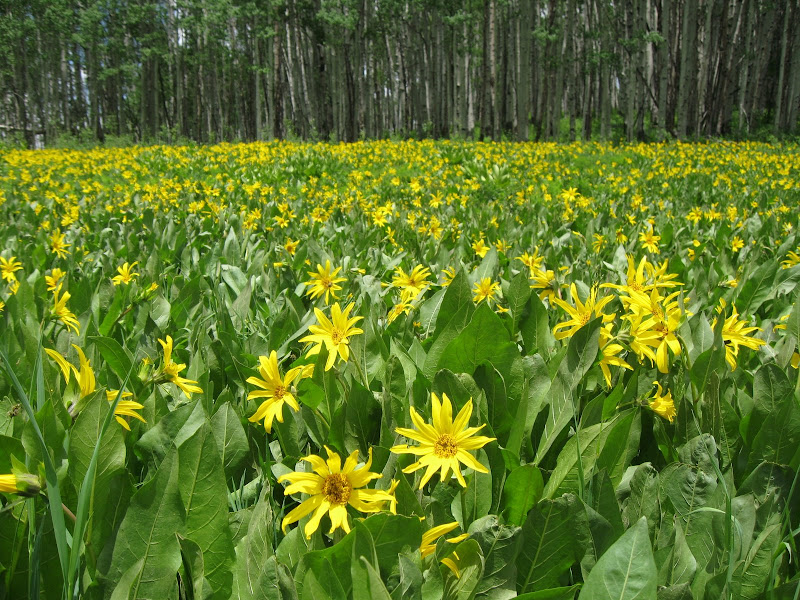 Woke a bit later to the sweet smell of brown dirt and green leaves. Sat up, stuck my face into the nearest blossom, and didn't process another thought the rest of the ride. 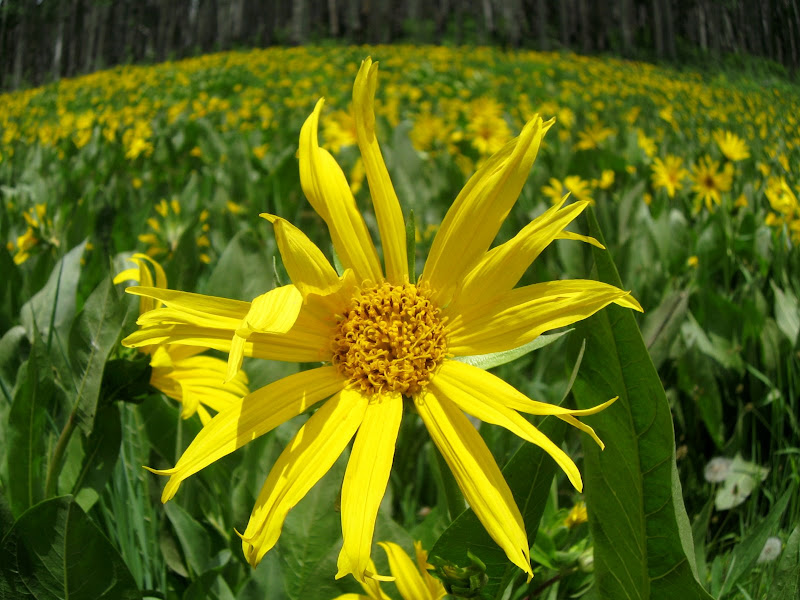 It's soil, not dirt!

Joined Mar 28, 2008
·
129 Posts
Now THAT is a Passion post! Thanks for the great photos and introspective musings.
G

jhitch said:
Now THAT is a Passion post! Thanks for the great photos and introspective musings.
Click to expand...

No question about it.

Pretty country you guys were riding through, too.

Thanks for the awesome pics!
M

Joined Apr 11, 2008
·
251 Posts
Your photographs are just wonderfull, thx for sharing them

Nope...but getting old and not enjoying it would be. Sounds and looks to me like you've got it right. Great post as usual.

Love the flowers (of course), but also really enjoyed your poetic descriptions. (Does your wife know about this other woman?? )

Age? Sure. Think about your metaphor for that trail, and how a youngster might "enjoy" her versus someone with more, well, experience. Makes sense, don't you think?