Joined Jan 13, 2008
·
588 Posts
We just got back from a bike trip in southern Morocco, through the anti-Atlas mountain range. Most people equate biking in Morocco to going to the Atlas mountain range, but everyone "in the know" pointed me solidly to the more southern anti-Atlas. Less-travelled paths, more different & spectacular scenery. I wanted an itinerary that was only suited for fatbikes and not fall into the common trap of limiting ourselves to desert trails. So much has been written about the can's and can't do's of trail fatbikes that I didn't want to include sand or snow.

So with the aide of a local trekking guide I spent quite some time preparing a special route before the rest of the gang arrived. Upon arrival the first thing we made sure was that everyone was running a tubeless setup, you'll see further on why.

Then off we went, 11 bikers, a van with all the bivouac gear and a 4x4 as assistance "in case of". Not that the 4x4 would be able to follow us much, but at certain points our trails intersected with jeep trails and a bit of extra water is always welcome in those ranges. Foregoing assistance would have slowed us much, limiting our daily range severely because water sources are scarce. From Agadir we went by minibus to the southeast, a 2h drive up into the mountains before we unloaded our bikes. Starting altitude was 1700m on a plateau at the start of a canyon.

After a fast descent through the gorge, we climbed back to the plateau and a Berber (the local people) village. It was just the start of a school holiday so we were always first spotted by the kids. Which were dumbfounded to see us and our bikes. A pity they almost always wouldn't allow us to take pictures.

From then on it was mostly singletrack up & down several ridges with small villages on the crests. The last ridge led us down a shallow valley where the trails petered out and we spent the next few hours barreling our way over the mountain sides full of rocks and down into gulleys with gravel bottom. Next to impossible with a normal mtbike, fun with a fatbike .

The last climb took us to the upper edge of the village of Tazalaght and a (frigid) bivouac at 1900m altitude. I don't like sleeping in a tent when I have a good sleeping bag, I much prefer open skies above me but as a compromise I spread my matress in the mess tent. And a good thing I did because the tent roofs were covered in thick dew droplets at sunrise. That would have meant a soggy sleeping bag .
Nothing beats waking up above the clouds...

The next day we started out on a number of interconnecting jeep tracks. Everybody was able to bike at his own pace (thanks to a GPS track) but now and again we bumped into each other along the way. Time for a group picture!

After an hour on the jeep trails, we dove off the edge of a huge canyon following the old caravan route - pretty rough since no one uses it anymore. Once on the valley floor we followed the river bed, now and again cutting off big meanders on singletracks.

Down in the canyon, we came across several little villages. The bigger ones all have a mosque and the older ones an "agadir" in a fortified position on a butress. An ancient Berber agadir is a mix between a barn, a bank and a castle. It was the place where villagers stored their belongings, from food to riches, in case of trouble. Guarded, fortified and on the inside divided into small compartments to prevent total destruction in case of an earthquake.
The next bivouac was in an oasis at the bottom of a side canyon. 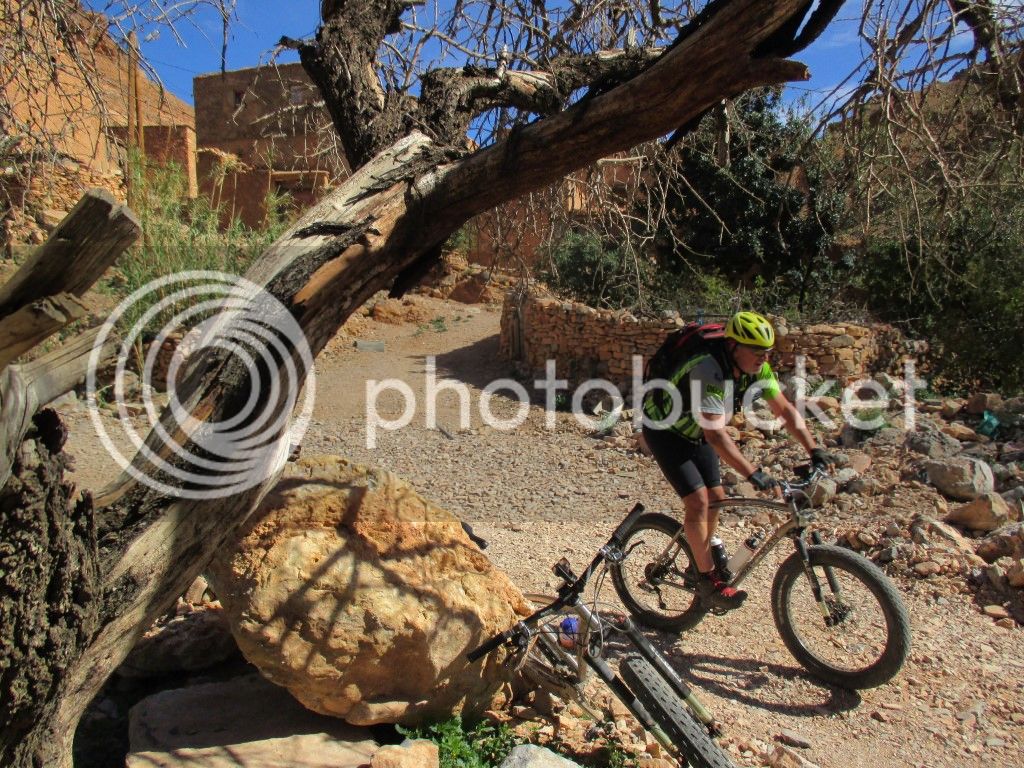 Playing cards, reading of just staring into the campfire... mentally preparing for tomorrow...

Yesterday it went down into the canyon, today we start following the river bed of yet another side canyon and after a few kilometers start climbing out of it along an old goat trail. We tried to hire a few donkeys to carry our bikes, but their owners refused, telling us the trail was too bad for the poor animals. Oh well... .

It took us a few hours to reach the highest pass, but the higher we came, the more parts of the "trail" that were bike-able. Just.

Just below the pass, we came upon an old caravan route that was marginally better. From there on it went up & down to the village at the far end of the plateau.

From there on we had two options: either continue over a few lower passes and some really tough trails, or the "scenic route" along jeep trails.
The singletrack option highlighted the reason for tubeless. Pulling the thorns out was not a good idea, it was better to just ride them off - keeping the thorns as "plugs" inside the tire.

How many asses are on this picture ;-)? From this almost-deserted village a trail dove steeply off the mountain side. Look for the bikers...

Welllll... whereto... anyone read Berber or Arabic? Down in the valley the two route options came together again. About half of our group took the scenic route and were none the worse from it. They likened it to the Whole Enchillada near Moab.

And to conclude a great day, an easy descent with the main range of the anti-Atlas as a stunning background. We ended up in Tafraoute, a lively town which was kind of a shock to us after days of relative solitude in the quiet Berber villages up in the mountains.

Rocking on a Rocky

Devastazione said:
Amazing. So why fat and not a 29er ? Or better......were you guys happy about riding your fatties in there ? My LBS owner goes to Morocco every year and they take their 29ers.
Click to expand...

Because fatbikes are so much more "all terrain" compared to skinny ones. Morocco certainly has plenty of normal-bike trails, but I wouldn't advise doing the route we followed on anything but a good fatbike.
That was the whole idea of the trip, to do something "where no bike has gone before". We could just as well have booked into one of the myriad of bike trips organised in the Atlas mountains, but what's the fun of that ;-)?

We biked about 300 kilometers and had to hike-a bike between 5 and 10k. I'd guess that with a normal bike you'd have to push or carry it at least 50k along the same route, due to gravel river beds and extremely rough terrain.
With a fatbike (and a high BB) we could power over incredibly big rocks on flat terrain at speed - the slower, the more difficult and more risk of a rock stopping you in your tracks and going over the bars.
Doing that with a normal bike would be incredibly more strenuous, pose serious risk for out-of-control faceplants, snakebites right through the tire and/or destroyed rims.
And in most of the gravel river beds it would just be a walk with a normal bike, even with our wide tires it was sometimes "limit". There's a reason they put gravel pits on racetracks or to stop runaway trucks on mountain descents... it's worse than sand if you want to ride over it.

Plus, and often forgotten: the added safety factor of the wide & soft tires over rough terrain. I've got lots of experience with crash-related injuries while away with groups of bikers and was worried. Because some of the trails were... serious, no mistakes allowed. Crashes were going to hurt. But nobody crashed in the rough stuff and apart from a sprained ankle from dismounting in a hurry, everybody was good.

4 of the 11 bikers on this trip had rented a fatbike just for the occasion. 3 of them bought their rental afterwards. So yes, we were happy with them .
The only one of the bunch who didn't want one afterwards was afraid of what his fellow bikers would say when he got back home and rode on his normal trails...
1 - 15 of 15 Posts