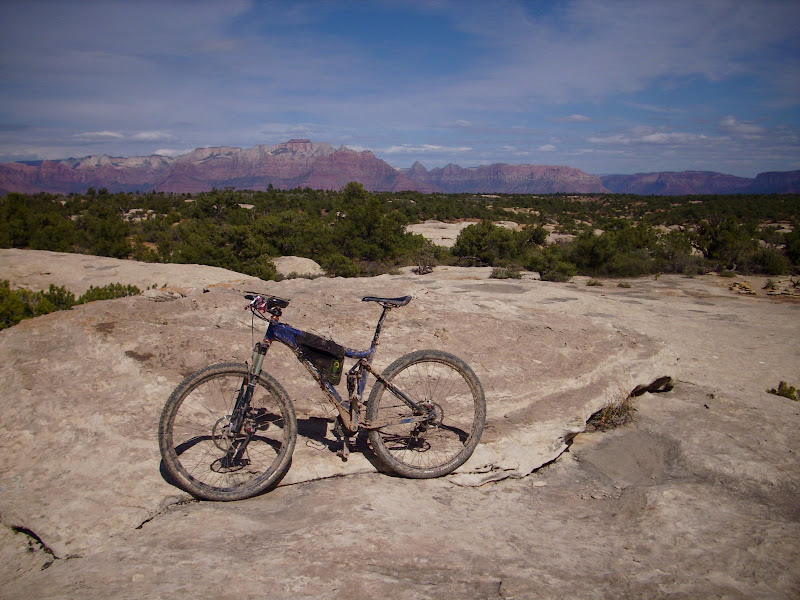 2 years ago, due to an odd Arizona law that uses a percentage of the state tax on Indian gambling revenue for merit-based teacher incentives, I got a fat bonus check. I used it to buy a nicer bike than I'd ever thought I'd own.

After riding the Kokopelli Trail in a day on the original iteration of my Karate Monkey, and beating the **** out of myself in the process, suspension seemed like a good idea. 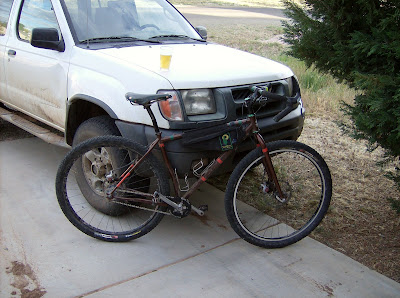 I was really excited when the impossible light box of frame and parts arrived from The Path. A dream come true with the full force of cliche. 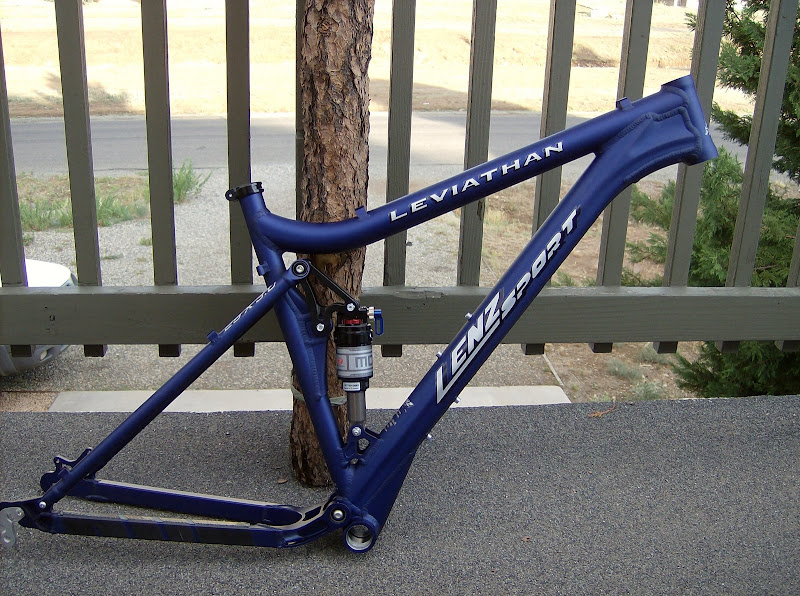 It's never looked this clean since, and never will.

Initially, I built it up as a rather peculiar drop barred machine. 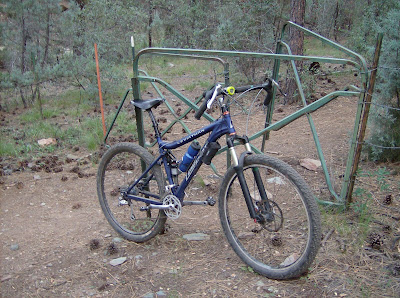 I've gone away from Midges, Brooks saddles, and big rings, and towards tubeless wheels, but almost all the other components in the original build are still on it as it sits today. 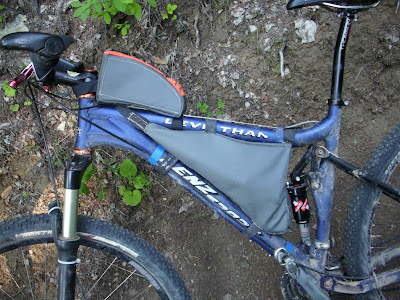 Taking the scenic route back from the trails on back roads (riding the Lev, of course), I realized that aside from ripping apart a rear derailleur in alpine mud back in October of 2007, I've never had more than a mundane mechanical. 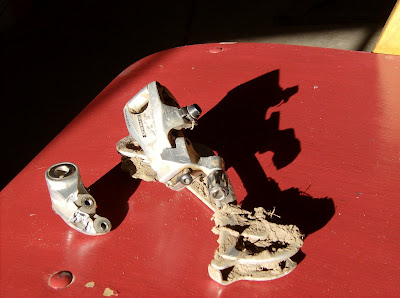 All of which is to say that I really like my bike. Some days I like it more than others. I even tried to sell it last fall. Thankfully, no one bought.

A large part of my affection is no doubt due to context, to places I've been and things I've done (often with superlative company) that are responsible for the memories. Like this one, the morning after Dave Harris and I were shot at, and buzzed via ATV, by drunken yokels while we were camping south of Escalante. 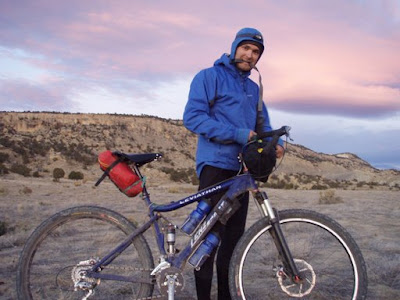 Or this, taken during the 2008 Arizona Spring Fling. I had intended to ride the singlespeed on this ride (Black Canyon trail), but had aggravated my old wrist fracture two days before going OTB (on the Lev) on National, and thus needed suspension. I did clean an uphill switchback on the Lev which Max didn't, which was notable (both because the Lev isn't a switchback machine, but moreso because Max is a really good technical rider and that's the only time I've ever outriden him on anything). 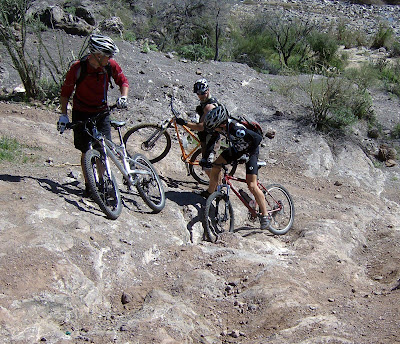 Or this one, taken by Enel on one of the many exemplary local rides in Prescott. 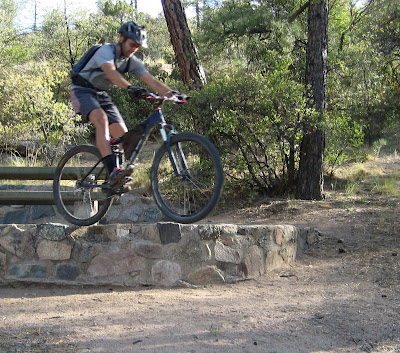 But I do think a lot of my fondness, affective, indeed love for the hunk of alloy comes from it being the right bike for me. I bought it unridden, because guys like Mike and Scott rode and liked them. In short, because it's reputation and numbers were good, and that had steered me true with my Karate Monkey. Donkey helped with the sizing and the ordering.

The Lev is not the most agile of bikes. It's long, and slack, and has a high bottom bracket. Tight maneuvering, especially at slow speeds, is not it's forte. It bobs climbing out of the saddle, and sometimes the high saddle (and a lack of finesse) makes remounting comical.

The Lev's ideal terrain is moderate-to-rough, straight forward or sweeping turns, with decent speeds. Point it down a few hundred yards of 1' to 3' ledges, cobbles, and sand, and relax. Middle ring through rolling debris in the midst of a 10 hour day, when the sun is up and mojo has you flying high, and the "obstacles" cease to be. In sand pits my faith in forward progress has given up far more often than has actual traction. Same with granny gear technical crawlers. Especially granny gear technical crawlers.

The bike's tough. I've kicked football size rocks into the downtube, smashed the bb shell on rocks and logs, endo'd it more times than is reasonable, rolled it down a seven foot ledge (not on purpose!) and whacked the top tube dead onto a volcanic hatchet rock (ditto). The wounds are there, but they've always been superficial. I wore the factory MC3.3 down until it needed a rebuild after 8 months, then toasted the rebuilt shock (actually, the bushings and eye mounts) in the next year. The pivots have down there thing throughout without complaint or need for attention.

The tire clearance is good. Not spectacular, a Weirwolf on a wide rim fits, but not commodiously. The Ignitors and XDX's I've run for most of it's life fit perfectly.

It has a funny name, and garners a fair few odd looks and questions on the trail.

It may not be the best bike for everyone, but it's the best one for me.

Joined Jul 14, 2005
·
3,049 Posts
What I really mean to say is: I love my bike, and I love biking and all that comes with it, and feel especially blessed to have the machine and terrain and days and people come together as well and as often as they have in the last two years. 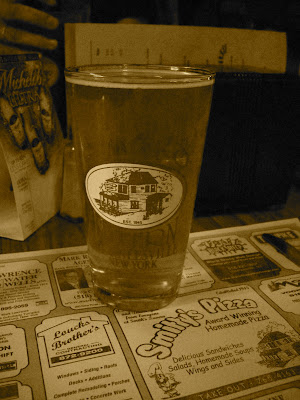 Joined Jan 14, 2004
·
3,249 Posts
Well put. I can relate to basically all of that....especially the fond memories of rides/friends that attach themselves to a bike.

Can't say the same for the look of your pint though! Is that meant to be beer?
D

Has it really been two years since we pressed in the headset one nice evening? I believe Reba was a leftover of mine as well.

bonesetter2004 said:
Can't say the same for the look of your pint though! Is that meant to be beer?
Click to expand...

Not the best I've had, by any means, just the nearest photo. Lets do better... 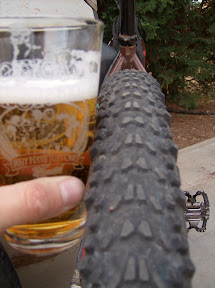 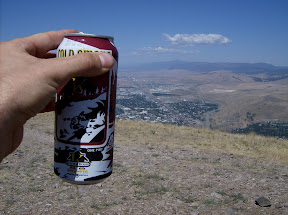 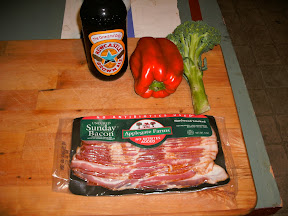 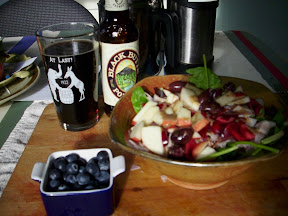 Enel said:
Has it really been two years since we pressed in the headset one nice evening? I believe Reba was a leftover of mine as well.
Click to expand...

Yep, nothing but the finest washer stack and big bolt treatment.

That Reba has just been absolutely skinking bombproof. I add a bit of air once a month, put a bit of lube under the seals upon occasion, and run into stuff. Can't ask for more.

In FTF We Trust

Joined May 21, 2004
·
1,815 Posts
Oooh, Cold Smoke is tasty. I'm sure the Lev works as well as my 'Box works in the nice rocky Montana trail conditions. There's something special in the Lenz bikes for sure, not sure what but my 'Box is one of (if not the) best bike I've ever had. Funny that Enel's had something to do with both bikes, too.

el-cid said:
Oooh, Cold Smoke is tasty. I'm sure the Lev works as well as my 'Box works in the nice rocky Montana trail conditions. There's something special in the Lenz bikes for sure, not sure what but my 'Box is one of (if not the) best bike I've ever had. Funny that Enel's had something to do with both bikes, too.
Click to expand...

I still regret selling that frame. I like it's replacement though.

ionsmuse said:
Not the best I've had, by any means, just the nearest photo. Lets do better...
Click to expand...

frorider said:
so what is the BB height on your rig w/ those tires?
Click to expand...

Hijack...the BB ht of my Behemoth w/Rampages is 14 inches on the nose with no weight on the saddle. Which is perfect as I use 190mm cranks. Definitely a high BB but doesn't seem to effect low speed handling and I don't get pedal strikes with the long cranks. Likely similar on the Lev.

Back to topic...There is definitely something about the Lenz frames that garners loyalty. My 'Moth is the perfect frame for me as well, and can without question understand ionsmuse's feelings about the bike. I love my Chester too, but if I had to pick one I think I'd have to go with the Lenz. Something about the fit, the ride, and the overall package that's just right.

Joined Mar 12, 2008
·
395 Posts
Great write up. Makes me really appreciate the past two days of awesome rides from my house. And I can't wait to finish building my wife's Leviathan for her to ride....

For Arizona and Utah rock crawling and ledge bashing the high bb is perfect. It's overkill for most of the buff forest cruising around here (Montana), but that's ok.

ionsmuse said:
This is my bike...

...It may not be the best bike for everyone, but it's the best one for me.
Click to expand...

Joined Jun 10, 2005
·
2,543 Posts
Nice. I am immensely satisfied as well. The Lev is a hard act to follow for any replacement bike. It has surprised me in how well it has handled such a wide variety of conditions and rides and is always steady and competent and, every once in awhile, brilliant.

I never pre-rode one either.