In the Land of the Rising Sun

Joined Dec 31, 2003
·
1,161 Posts
This week started off with a flight from Seattle to Tokyo. I spent the week here in Japan meeting with clients (so to say) and scoping out some projects coming up in the summer of next year. I spent the better part of 2004 working and riding in the area so I was looking forward to reconnecting with some old friends and possibly sqeaking in a ride. I had a very productive week and managed to catch up with my core group of Japanese and American friends here. It is nice having locals for friends. Work hard during the day and enjoy friends and off the beaten path cuisine in the evenings was the routine. There may have been a beer or two involved as well I was not sure if my schedule was going to allow me to get in some trail time or not and early in the week the weather was not cooperating either. Near the end of the week the skys cleared and while generally brisk throughout the day it was nice.

Friday morning it was clear enough that Mount Fuji was visible int the distance. By Friday afternoon the skys hazed up enough that the mountain was hidden, but my to-do list was complete and I found myself with some daylight left to burn. A couple of phone calls revealed that all my buds were tied up so this would be a solo affair. This was cool as I have done this trail system many times and I was looking to some trail solitude. I grabbed a rental hardtail and headed for the trails. It is about a 3 mile street ride to the Ogsuyama trail system. It is uphill most of the way as you head away from Tokyo Bay. It did not take long to click back in the routine of riding on the other side of the road here. More importantly you have to remember that most of the danger comes from the opposite direction that you are used to glancing at. I did have one exciting moment two blocks into the ride that drove the message home.

The street ride was great and was just as much of a cultural experience as it was a good warmup. I was soon off of the main streets and into the back streets and the more rural communities. It is common to see small gardens in these areas right along the dimunitive streets. I always enjoy looking at them as they provide such contrast to the cities below.

I was soon onto singletrack and I had forgotten just how slick the clay soil can be with just a little moisture. Often times this clay was combined with roots and leaves. Even with the tire pressures somewhat low it was often really tricky and it some spots hoofing it was the only way to get up. Going down was a bit easier but still it was mongo tricky.

This picture does a poor job of depicting the grade or slickness of this stuff.

The trails are not all a slick rooty mess, sometimes it is incredibly buff with mucho flow. Most of the trails I rode today have seen some debrushing work in the last year as the were much less crowded with brush than I remembered. I also ran into a few hikers and they were always very polite and often they would say something to the effect of "Wow" or "I'm amazed to see you here". This trip was also good to brush up on my very rudimentry Japanese.

The route today involved going over the top of Ogusayama and taking an often steep singletrack down the other of the mountain (and pennisula) to Sagami Bay. I remembered a bunch of log steps but I forget it was something like a thousand or so steps. The rental hardtail was beating the crap out of me on this stuff and I had to take a breather after every 100 or so steps. 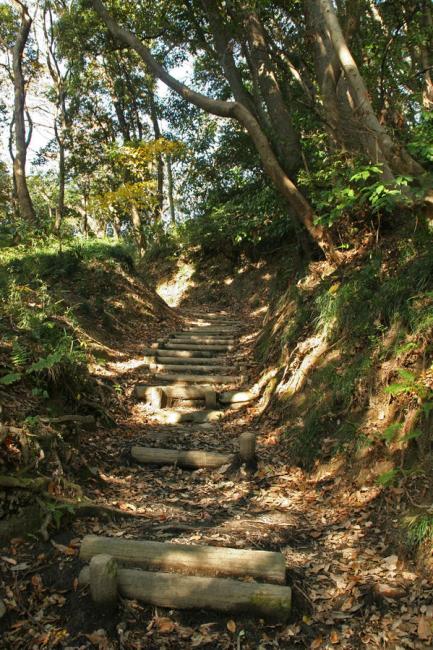 Those steps and log fencing you see in the pictures are not wood but carefully crafted concrete logs made to look pretty natural.

Once I got down near Sagami Bay I popped out onto a street and rode about half a mile to pickup a service road to go back up the mountain. It starts out as narrow pavement, then gravel then dirt. Many of the local riders call it the seven steps to heaven as it is quite steep but flattens out on seven occasions on the climb. You are pretty shaded on most of the climb so the views are limited with the exception of a few spots were you can peek through and get a good appreciation for the general steepness of the Japanese countryside in this area. 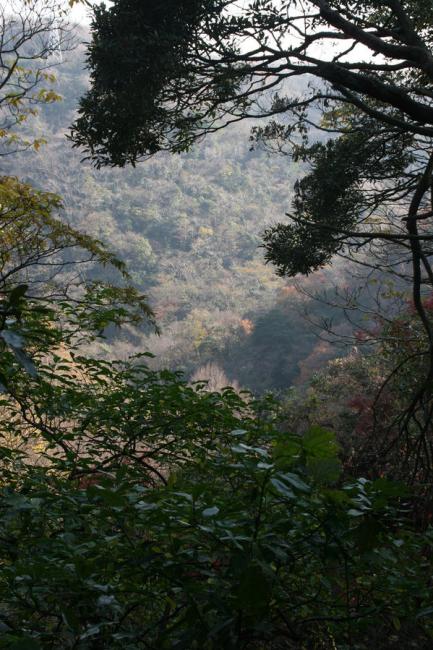 After getting back on top of the mountain, I picked up another trail that would take me down the southeast flank of the mountain and back to my side of he pennisula. This trail is one of my favorites in this systems and it did not disappoint. I have not been in Japan at this time of year before, so I was enjoying more autumn colors that I had not seen before.

I soon popped back out onto surface streets and started making my way back. I made a stop at local store to grab a snack. I forget the name for these but they are rice triangles that are stuffed with different things and then wrapped with seaweed. I think of them as Japanese Clif Bars. They have all types and some of them are a highly acquired taste. I typically stick to the light blue ones as they are filled with tuna. These are yummy, a great ride snack and only costs 105 yen (About $1).

After the snack it was mostly of series of downhill street cruising back to where I started.

After returning the bike and cleaning up, I spent the evening having dinner with friends in a tiny Mom and Pop resturant near the town of Zushi. I'm currently setting in the airport waiting for the plane that is going to take me home. Ironically, due to the the international dateline, I am technically already home

Joined Dec 26, 2006
·
273 Posts
onigiri...sometimes they come ball shaped, but mostly you find the triangles in the convenience stores. Yours actually says "Mayonaise and Sea Chicken"...tuna salad...one of my favorites too. The packaging can be tricky...it actually has numbered corners so you can open it in the right order to keep the nori (seaweed) in one piece.

Funny thing is that some pretty wholesome food can be found in Japan on the cheap in the convenience stores, food stands and "depachika" (grocery store basement deli's). Next time find a Japanese bakery...they make some AWESOME hot-pocket-esque baked sandwiches, pigs-in-a-blanket, tiny pizzas etc...fresh made, hot and really cheap.
S

Joined Jul 6, 2008
·
182 Posts
Being a vegetarian in Japan, the food choices were pretty limiting but I've gotta say that I loved it. After I finish HS and college, ill definitely be heading over there to check out the trails and such. Mount Fuji was great and the hot springs/spas were cool. Lots of fun stuff to do in Japan.

Joined Jan 2, 2004
·
464 Posts
Great photos, thanks for posting. I'm trying to decide between a return to South Korea or perhaps a year or three in Japan, so it's great to see what the Japanese trails have to offer.

Two things I saw are just the same as Korea - the concrete blocks shaped and painted to look like logs and the rice snack, which is called samgak kimbap in Korean.

At least the Japanese drive on the correct side of the road.

mtbbill said:
Ironically, due to the the international dateline, I am technically already home
Click to expand...

I remember being *blown away* by that as a kid.

Thanks for the post. Lived in Japan for a few years as a child. I always admired the wonderfully-peaceful Japanese that we interacted with.