how do you remove these bearings from DW link

Joined Jan 2, 2004
·
1,931 Posts
What's your trick for removing the smaller bearings from the lower DW linkage: 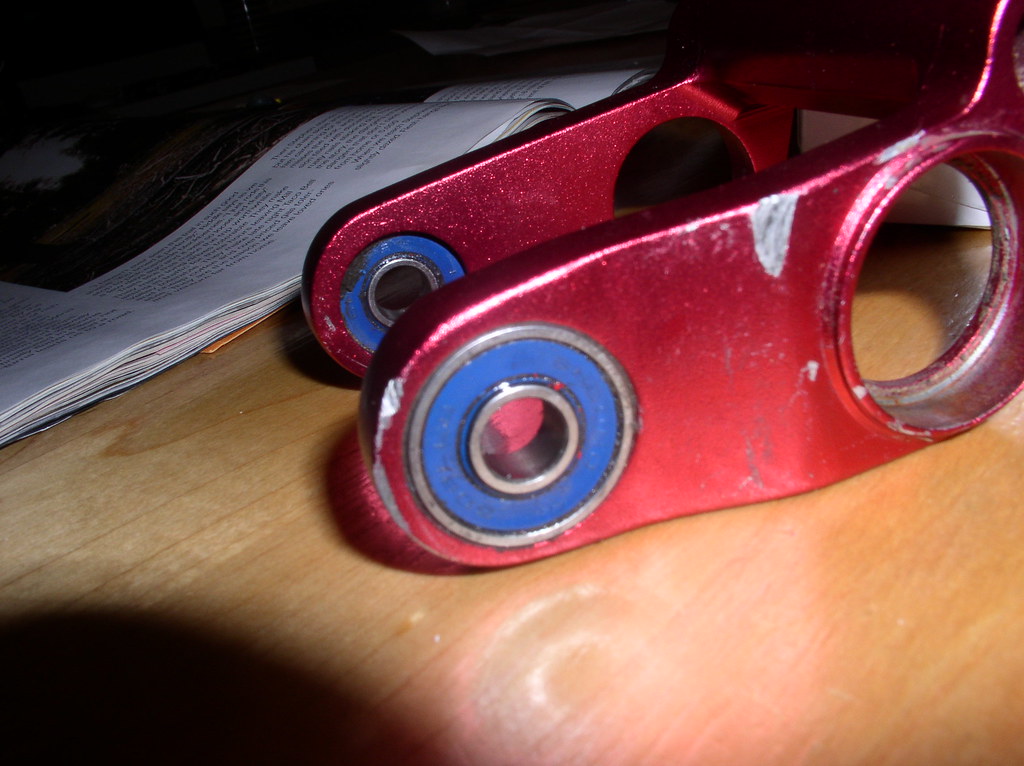 The bigger ones were easy to tap out, but on these the punch is angled and I didn't seem to budge them.

Has anyone replaced the full compliment of bearings on their Azure or MKIII
Any tips?

Joined Jan 2, 2009
·
527 Posts
I personally haven't had to do this, but I have a friend that works in a shop. He told me once that some bearings are lock tighted in. He said to remove it he would apply heat with a small propane torch and it would then slide right out. You have to be very very careful not to damage the paint or frame though. I personally would take it to a shop or call the manufacturer first.

Why remove the bearings?

Joined Jan 2, 2009
·
527 Posts
Because he is replacing them either because they developed play or he is upgrading them !
K

[I posted this in tooltime a while back...]

I've removed pivot bearings from some of my full suspension bikes by pressing them out using two sockets (from a socket set), a suitably sized bolt, nut and washers.

As noted above, the bearing can (usually) only be extracted in one direction. There is a little lip at the end of the bore that holds the bearing in place, preventing further movement in the direction of the lip. Figure out which side the lip is on.

Place the "presser" socket in the bore on the side with the lip and place the receptacle socket on the other side (without the lip). Thread a bolt with two greased washers through the holes in the sockets and bearing. Place a couple of greased washers on the other side of the bolt and then loosely put on the nut. Finger tighten the nut and verify that both sockets are positioned correctly.

Tighten the nut using tools until the bearing is pressed out. It is likely that quite a lot of force will be needed to make the washer move at the beginning. Once you get it started though, it's usually smooth sailing.

Alternately, you can use a C-clamp instead of the nut, bolt, and washers.

Joined Jun 11, 2006
·
1,229 Posts
This is what I used in one combimation or another for removal and installation along with a few sockets of all the bearings. On that bearing I used a socket to pull the bearing thru into a larger socket basically. I recall think it would be easy to deform the link and the larger socket wants to drift off the edge somewhat.

The hardware was just misc. stuff on hand. The longer bolt is 3" the shorter bolt's nut has a connected washer that spins free which was helpful on some of the combinations.

Edit:You can use the old bearings to press in the new ones

Go slow and be sure everything stays lined up as you work them out.

Joined Oct 11, 2005
·
3,814 Posts
I would really go with a bearing press. I'm sure that they're not that expensive, and it'll make for a safer way to re-install the new bearings without damaging them.

Joined Dec 9, 2007
·
110 Posts
You can also heat up the linkage up in an oven at 350 for 10-15 min grab some oven mitts and they should tap right out.. As for reinstalling place the bearing in the freezer for an hour and they will press right into the linkage without any force. My other hobby is 1/8 nitro buggy racing so I have replaced a bunch of engine bearing.. Hope this helps
N

Sorry to resurrect a dead thread, but could the OP tell us how you ended up removing those bearings? I've got a bearing kit and plan on doing this soon, so some tips would be appreciated.
A

Joined Jan 2, 2004
·
1,931 Posts
A friend helped me, but Chris at Real world Cycling (enduroforkseals) sent me these pictures that might help you. 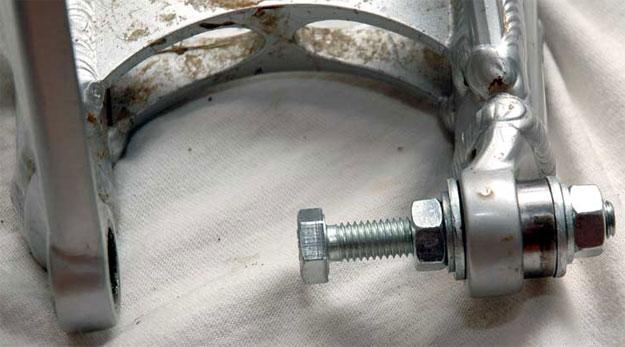 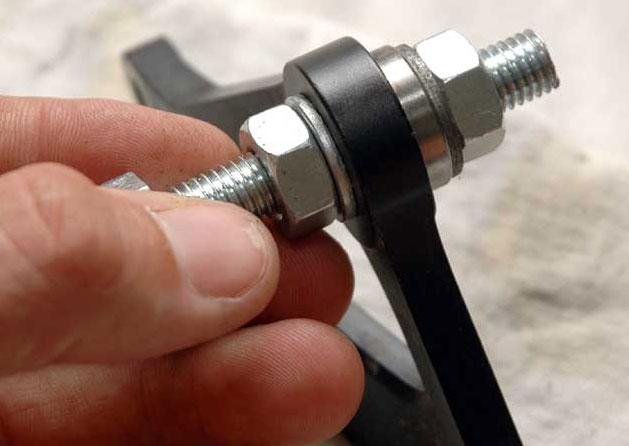 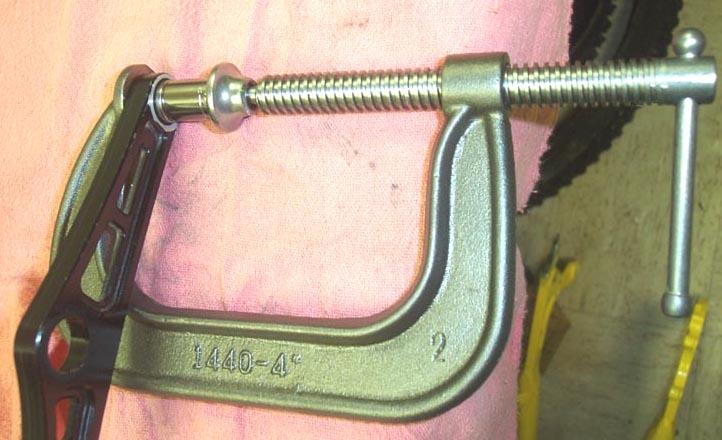 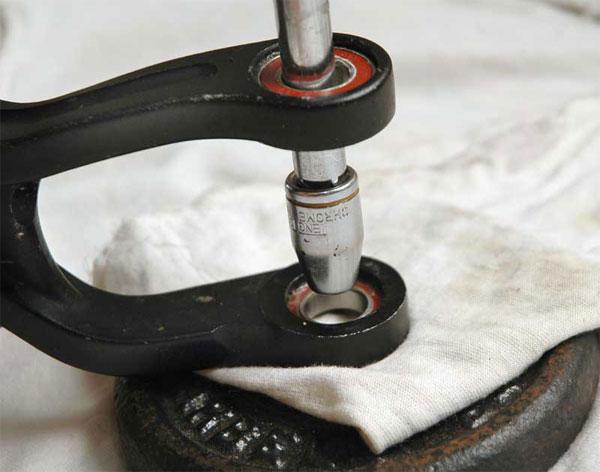 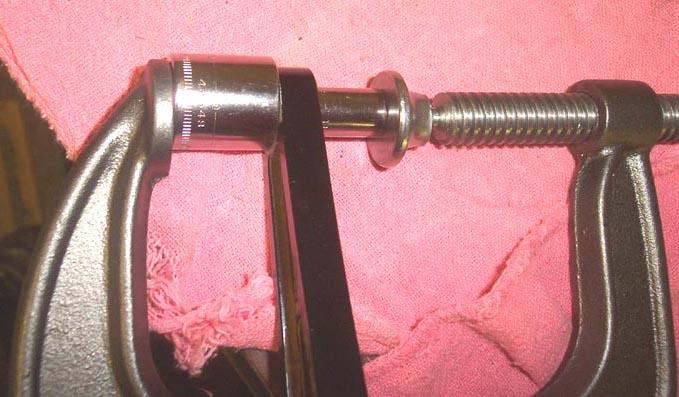 That picture with the C-Clamp and the two sockets is a rough approximation of how I remove bearings. I usually use a bolt, nut, and several washers threaded through the sockets in place of the C-Clamp.

I have used a C-Clamp in the past though and it works well enough. I prefer the bolt/nut/washer approach because it's easier to control. (With the C-Clamp, you have to keep the sockets aligned while tightening the C-Clamp. The bolt being threaded through the sockets usually makes this bit a little easier.) The one time that I did use the C-Clamp, I didn't have a suitable bolt handy. I also had my son with me to help hold everything in place.