Joined Feb 4, 2009
·
12 Posts
The day before Memorial Day. My wife and I were vacationing in Cornville / Sedona and drove (bounced) up Schnebly Hill Road in our f250 4wd. On the way back down, we stopped at the Cow Pies trail head to hike on the slick rock. We started our way up to damifino pass, and I was thinking that this was NOT a bike trail. A few minutes later, some young guy in a full face helemt rounds a corner on the trail behind us, followed by two other guys. Later on there were several more folks, both men and women, who reached the saddle, all excited to ride the trail. As I looked out over the mountain, I failed to see anything even remotely rideable, but they knew right where they were going.

I have been MTBing for many years. I have ridden many of the trails in Moab and never really shied away from a challenge, but there is no way I would ride what they called a trail. Seeing a video from Mountain Bike Bill and his nearly-fell-off-the-cliff adventure on this trail a few years ago confirmed my decision that this trail was built for people different than me.

I have no idea who these people are, but I thought maybe they would show up here. The old couple is my wife and me. 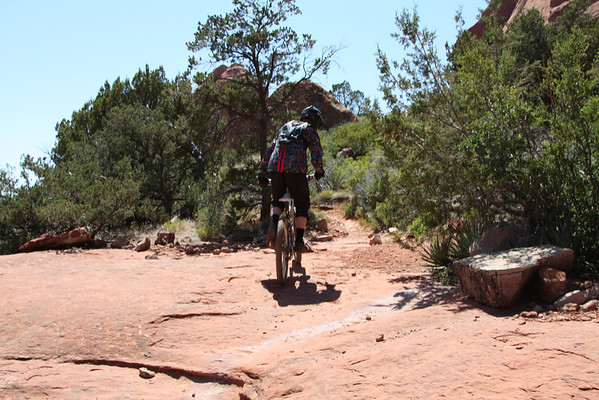 Joined Jun 18, 2004
·
8,235 Posts
Getting kinda hot for goggles, full face helmets and lobster gear but they were riding Damifino. HO contours Mitten Ridge in the other direction.
R

rockman said:
Getting kinda hot for goggles, full face helmets and lobster gear but they were riding Damifino. HO contours Mitten Ridge in the other direction.
Click to expand...

Yep, and besides it's just not that kinda ride. Everything on Damifino is slow speed, I wouldn't bother with any gear but different strokes fer different folks!
1 - 3 of 3 Posts