Joined Aug 25, 2003
·
17,245 Posts
The Missus is a longtime rider that would prefer to be on her mountain bike as much as possible. She also road rides when it's too hot or wet to be out on the trails, but make no mistake that dirt is where she'd prefer to roll.

A shoulder injury a few years ago went misdiagnosed and untreated, with the unfortunate result that it deteriorated significantly before she had a grasp on what she was up against. Therapy and time seem to be working, albeit very slowly. MTB riding not only hurts the shoulder as she rides, it increases the potential for crashing and reinjury. So MTB time has been limited and in the spring with tacky dirt, brilliant temps and stunning flowers that's a hard pill to swallow.

It wasn't difficult to notice her increasing frustration as the spring progressed and her ability to ride did not. We don't have many dirt roads around these parts that are accessible for day-rides, but there are just a few that lead to (and up out of) remote-ish corners of the valley. When I suggested 'sploring dirt and paved roads instead of pining for the trails she couldn't ride or duplicating road loops that she's done hundreds of times, her eyes lit up and she thought it was a great idea.

While she certainly *could* ride her FS bike on loops like this the fatty fat tires, steep-dirt gearing and double squish action are far from ideal. Likewise with her SS--geared for dirt and she's not enough of a techhead to want to swap gears or wheels before a ride. And since her road bike is limited to ~23mm tires we had a bit of a conundrum: What bike? 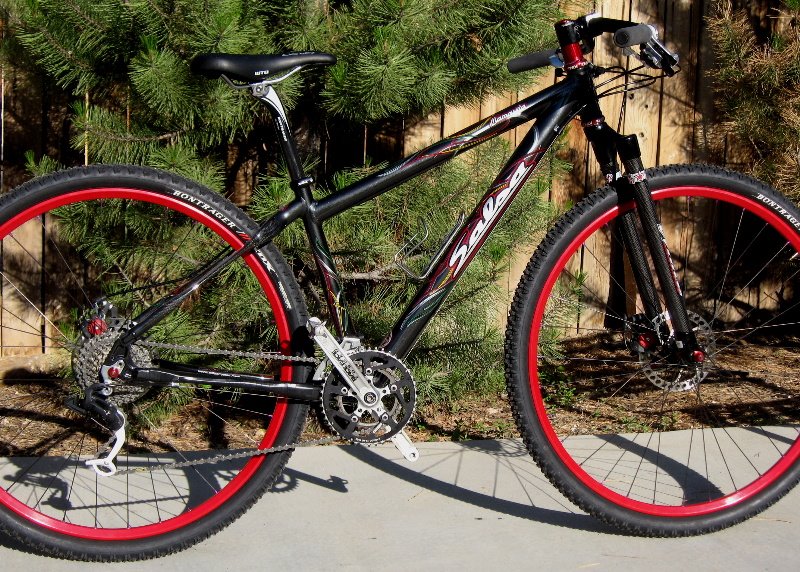 I always seem to have a pile o' componentry laying around looking for a chassis to hang on, so the legwork on this one revolved around finding the appropriate chassis. Herself's 5'4" height limited options considerably, so in relatively short order the frame list was down to 3. Of those, the Mamasita won out for various reasons like fit, cost, purported comfort, and somewhere in the middle of the list was the paint. I was pretty sure she'd like it. 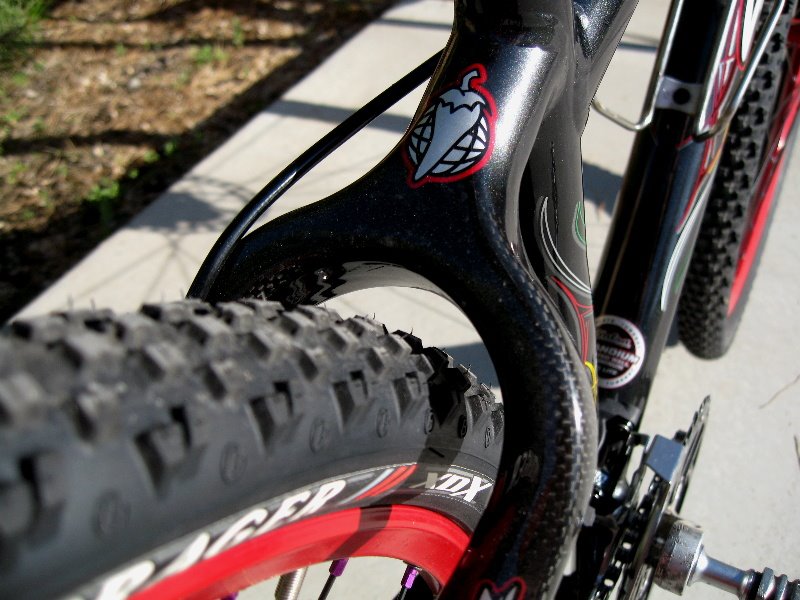 Suspension was considered but it seemed needlessly heavy for the way and places this bike will be ridden. There is a veritable plethora of rigid forks to choose from and when comparing the numbers it doesn't take long for your head to spin. I chose the local guys' product for many reasons, not least of which is that I've ridden and liked it myself. 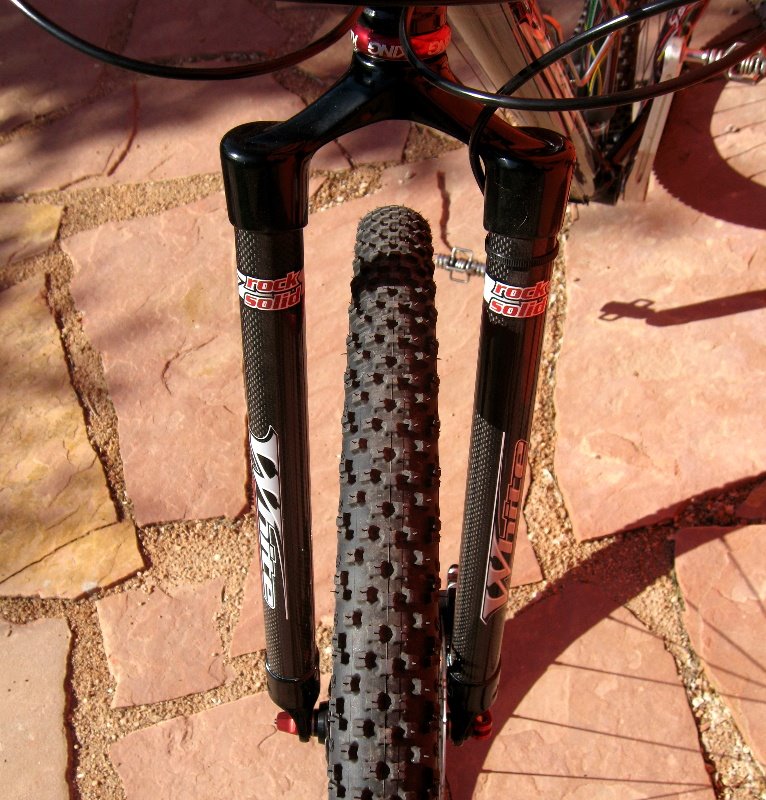 Since the drop bars on her roadie tend to tweak her shoulder on long-ish rides, and the flat bars of the MTB don't offer many options when cruising, I knew that she would want something a little different. I asked her a few questions and we mocked up a few hand positions, then I went looking. Closest thing I could find to what I *thought* would work is this bar by Origin 8. 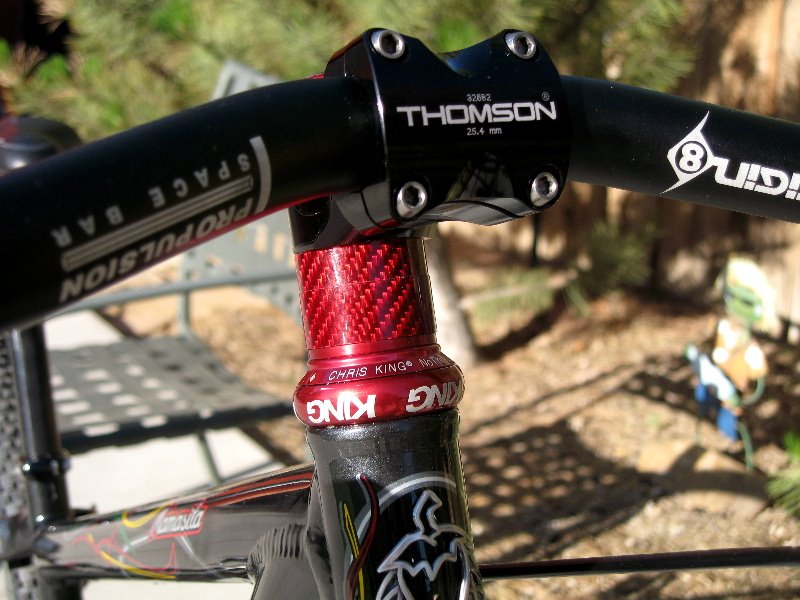 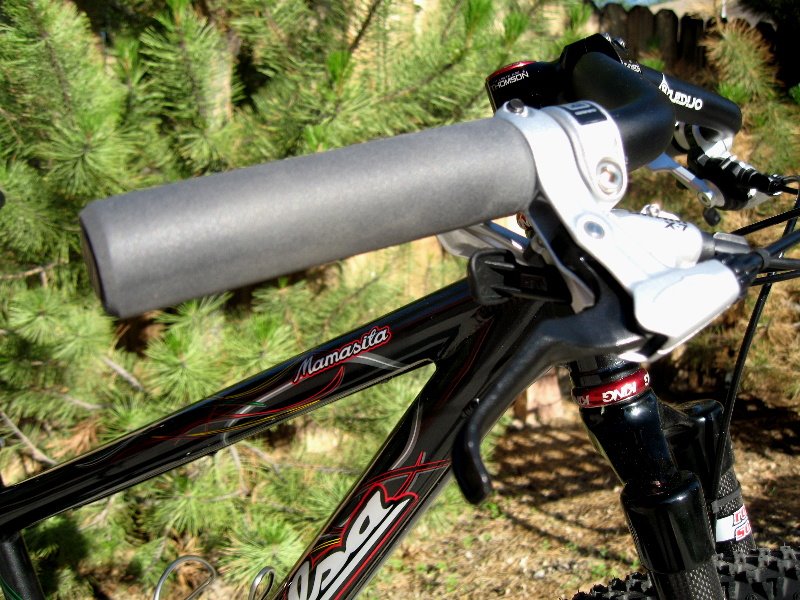 My last pair of 170 square taper cranks were bolted onto a Phil Wood BB that had languished on a shelf far too long. 30 x 44 gearing up front paired with an 11/34 out back allow her to get up any grade she'd care to see on this bike, and don't slow her down a bit when hauling the mail on tarmac with a tailwind. 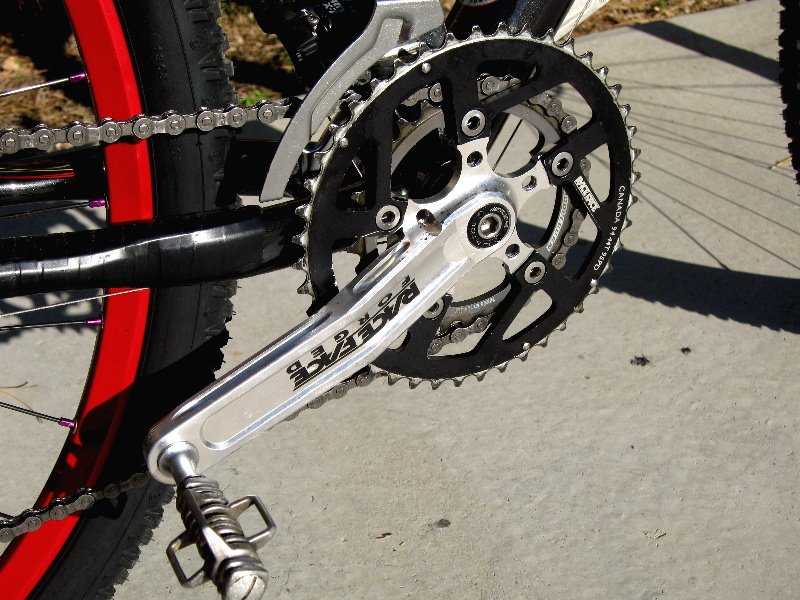 Favorite hubs ever laced 3x with triple butted spokes and alloy nips. Color was optional but these rims had been hanging around unclaimed for almost a year and they seemed to 'match' the motif of the rest of the bike so I didn't hesitate. Finished 'em off with some 44mm do-all tires. 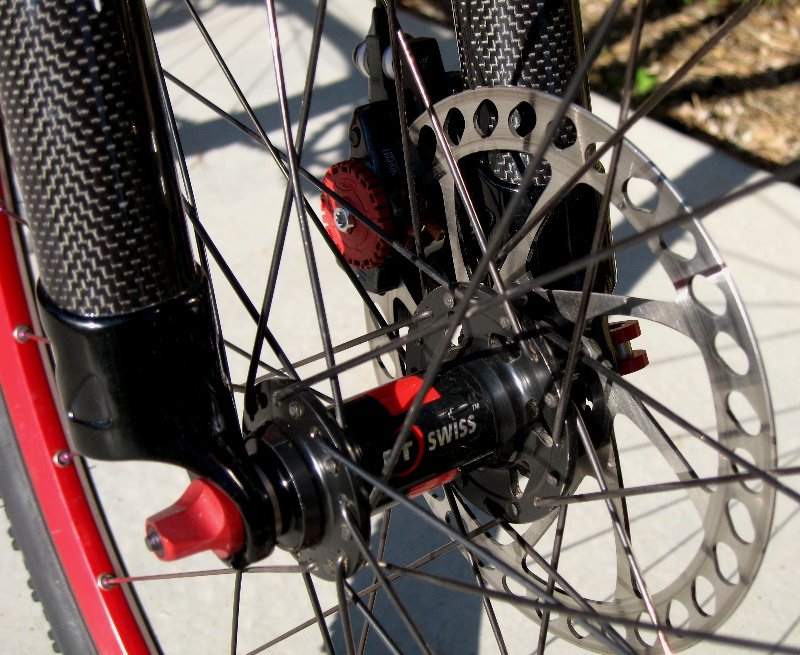 A comfy perch atop a buzz-killing post sealed the deal. 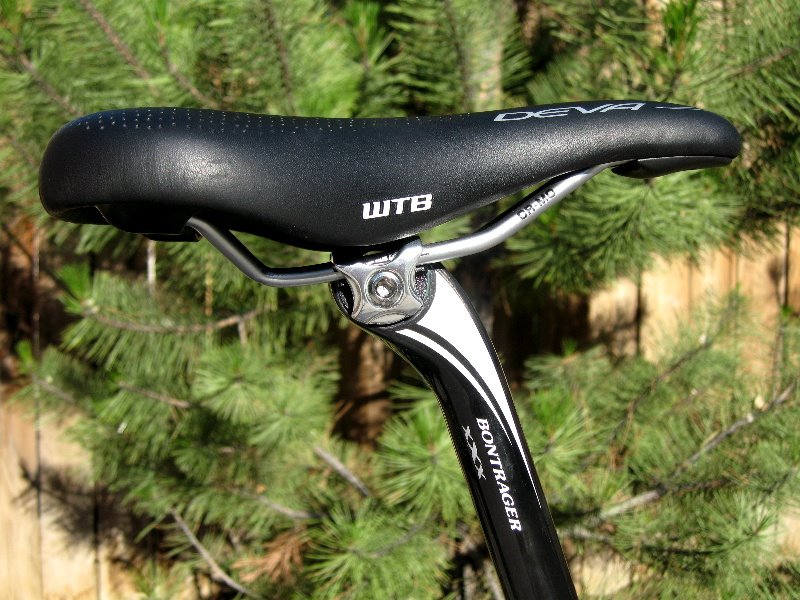 She's only been out on a few rides but the unhideable grin and bubbling verbal feedback tell most of the story. Tires are likely to change as the bike and rider settle into a niche, and the bars could potentially be upgraded to something custom if these aren't quite the solution needed.

Other than that it seems to have opened up many options for her and I'm betting it'll continue to get ridden bunches even after shoulder rehab is complete.

What are the rims? Velocity?

Just out of curiosity - what were the other two frames under consideration?

Joined Jul 16, 2007
·
662 Posts
Nicely done! That's a steed to be proud of and well matched to getting her back spinning a grin on any number of surfaces.

its best to install bolts where the screws would go to connect a 58bcd granny ring so the spider arm doesnt break..
M

Mike, would really appreciate a follow up report on how the "Mary's" work upside down for road work. I want to set up one of my bikes just like that for road/path work. The only thing that bike could use is some old school v brakes!

I just reinstalled a CK on my SS29 and don't recall checking to see if they are both the same.
T

JDay said:
Maybe I am out of the loop on some of the 29er stuff, but why are you running the CK headset bearings upside down?
Click to expand...

Because he can?
C

JDay said:
Maybe I am out of the loop on some of the 29er stuff, but why are you running the CK headset bearings upside down?

I just reinstalled a CK on my SS29 and don't recall checking to see if they are both the same.
Click to expand...

JDay said:
Maybe I am out of the loop on some of the 29er stuff, but why are you running the CK headset bearings upside down?
Click to expand...

The extra front end height of a 29er requires that the bearings be inverted so the grease doesn't bleed out due to the decrease in barometric pressure. It's science.

Did your wife stick with the upside down Origin8 bars or did she ultimately go to something different?

Joined May 15, 2005
·
1,318 Posts
Mikey, can we be expecting full photo journalistic essays of your significant other similar to the Tcheesy / Barny relationship?

Joined Jul 13, 2005
·
1,960 Posts
Jeez- who laced those wheels? I mean.... Jeez. You can find guys online that know a thing or two about a thing or two when it comes to lacing.
Great looking bike MC. As always, well done and outstanding in it's understatedness.... Wow, what am I doing reviewing wine? Subtle hints of an overture remenecent of Tuscany....
Sorry, I'ma doosh.
Lame story short- I hope it works. Karrie's Blur languishes as her back heals at an ever slower rate. She does still run though... but that's just seems like work. I mean, how do you coast?
Anyway, have fun. See you when the temps rise.

MMcG said:
I'm bumping this up out of curiosity.

Did your wife stick with the upside down Origin8 bars or did she ultimately go to something different?

No change in the bars. Only change was to swap the tires to Vulpines.

can't get right said:
Mikey, can we be expecting full photo journalistic essays of your significant other similar to the Tcheesy / Barny relationship?
Click to expand...