Joined Jul 2, 2009
·
13 Posts
I rode a Cannondale Caffeine 1 last weekend that I can never afford, but was so turned on by how light it was. I'll be very grateful for any suggestions for lightweight 29er hardtails or advice on how to build one of my own. Thanks!

Granted, it's a 1x9, but get rid of that heinous seat, and the bash guard, throw on a big chainring, FD, shifter and cables, and you'd still be below 26, I'd imagine.
M

Joined Jan 17, 2007
·
2,043 Posts
get light wheels and tires, probably an alu frame. being a smaller size would help. rigid with carbon fork would help too. but otherwise you can make a bike weigh just about any number you want if you throw enough money at it.

You got it right! Sad but true

wheels are at the top of the list though- light wheels of course reduce actual weight...but by reducing the rotating weight it will make the bike feel lighter than the actual weight reduction- this should help you on the path to your holy grail of bikes.

Joined Jan 11, 2004
·
14,017 Posts
If you care about weight, regardless its actual speed effect, rigid and 1x9 work well. 29" as most know has much less need of suspension. That's 2lbs+ right there. 1x9 saves another almost-pound. Just pedal harder

Total bike weight is at 24 lbs. This thing is a race winner, seriously fast, with multiple podiums this year. It took me almost a year to nickle and dime it together though. I have never stopped to add up the whole cost, but somewhere just over $2300.

Bumblebee said:
I rode a Cannondale Caffeine 1 last weekend that I can never afford, but was so turned on by how light it was. I'll be very grateful for any suggestions for lightweight 29er hardtails or advice on how to build one of my own. Thanks!
Click to expand...

Building your own is easy. Just start an Excel Spreadsheet with all of your components and their weights so you can adjust and plug and play components in the spreadsheet to see the total weight.

There are certain standard ways to get a lighter bike, so I'll just point you in a direction to start a list of a bunch of those standard components:

Shifters: SRAM twist shifters. X.0, X.9, X.7 - they are all light
Grips: get some foam grips - Bontrager Race X lites fit perfectly with the SRAM twisties and will weigh only about 15g for the pair when trimmed - or 18g untrimmed with trigger shifters
QR: KCNC quick release skewers at 45g for the pair
Seatpost: Don't mess around, just get the Thomson Masterpiece
Seatpost collar: Token at 8-9g
Saddle: Anything in the 190g - 210g range will suffice (WTB Rocket SLT - 210g; WTB Silverado SKT - 190g; WTB Devo Carbon or SLT - 190 or 195g)
Derailleurs: SRAM X.0/X.9 for the rear and the front doesn't really matter (although if running a 2 x 9 you can use a Shimano Dura-Ace road front derailleur and shave grams)
Brakes: Whatever sub 800g disc brake system you can afford
Cassette: XTR or even lighter, this one.
Stem: Syntace F99
Bars: Your choice as long as they are under 185g
Fork: Reba Race or Fox

Wheels: American Classic Disc - 1650g; NoTubes ZTR Race - 1370g; Custom Built wheels targeting the weight range of 1650 - 1800g weight range. Getting light wheels will most likely be the most expensive portion of your light bike. But you can still get to 25 pounds or below with a wheelset that weighs 1800 - 1900g and save some $$$ for the other components.

Crankset: XTR; RaceFace Next XC; Middleburn Duo or Triple; etc... . Lots of used market lighter ways to go as well (older Race Face Next LP; Turbines are both super light XC cranks and are on eBay from time to time)

I would say expect, if buying new, to spend $2K - $2.5K, $3K, $4K and maybe even $5K as you move from the 25 pound level down to the 22 pound level. That is not a lot of money for a light bike - in spite of all those that will moan about it. You gotta pay to play. Each pound - more or less - will run you another grand. The best company I have seen that builds light bikes using great components is Scott. Check out their new XC HT's to see what the spec on them to get ideas for components and price. In particular, look at the Scott Scale HT bikes. Those are all 26" bikes, but you'll get the idea of a company doing it right. The lightest Scale weighs 18 pounds and costs $11K. The heaviest Scale weighs 28 pounds and costs around $1K. The 8 models of Scales between those 2 clearly show the weight and price differences as you add or take off weight.

P.S. My XL size Dos Niner (closest thing I have to a HT) weighs 24 and change with my "heavy" wheelset and tires... 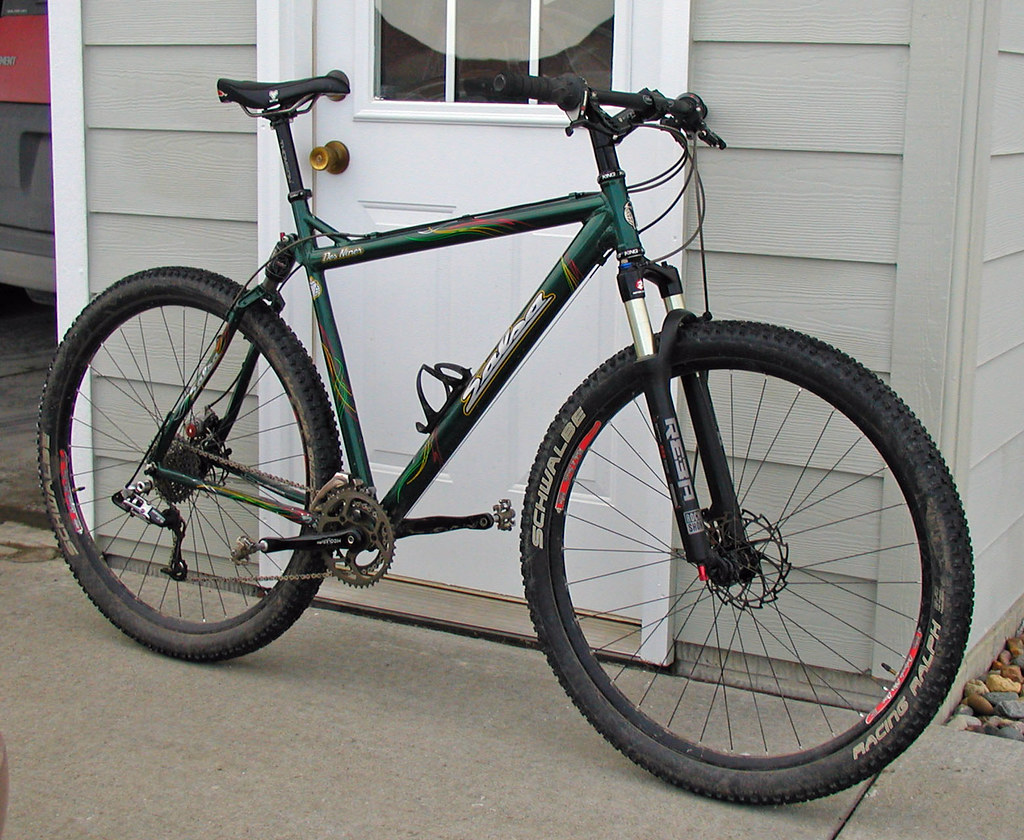 It was right at 25 with the Reba on it. Wheels are kind of heavy though. You could hit 24 no problem. 23 if you stay rigid.

Joined Jan 19, 2006
·
6,410 Posts
If you're looking for cheap(er), light(er) wheels, the Sun-Ringle' EQ23 rims with some light hubs should work nicely. I haven't really pounded on mine yet, but so far so good. Front is 805g on an AC hub, rear should come in around 910g (haven't broken that yet). ...and the Disc O Flea wheelsets which use the EQ23 have seen decent reviews and come in at ~1790g. Not sure of tubeless compatibility there.

Joined Apr 25, 2006
·
286 Posts
On One Scandal 29er frame. On sale now for 199 Pounds
On One Carbon Fork
Hope Pro II hubs
Arches with a Rampage and a Crossmark
Middleburn RS7 2 x 9 setup 20/30/40 drop the 40 or go the duo if you have a strong motor unlike me!
Formula K24 Brakes
Thomson Stem and Seatpost
LP Composite Bars
foam grips
Selle Italia SLR? gel seat
X9 ders and X0 twist shifters

It is well under your 25lb weight limit. There are lighter components out there too. But this made a good solid nice handling bike without breaking the budget too much.

Joined Jun 29, 2009
·
893 Posts
Bruce Brown is the Dos Niner man! Tuesday I get one of my own and the build begins. Please feel free to critique my parts list or take them as suggestions. My goal is pretty modest I think, 24.5 lbs or less but with the emphasis on durability and reliability at that weight.

Joined Jul 2, 2009
·
13 Posts
Thanks to everyone for their thoughts. You guys probably just saved me thousands of dollars.

Now all I have to find is shop stand so I have somewhere to build this thing.

Joined Dec 20, 2003
·
5,023 Posts
Me: Jamis Exile 29 SS. 21/Xl frame. Reba, XT cranks, WTB post/saddle, truvative riser bar, Origin8 carbon wrapped stem, Time Aliums, Avid BB5's, and the kicker, Easton CX-1 wheels with Bontrager tires(for the life of me, I can't remember which ones). Wieghs 25lbs even. I could easily get lighter with more money spent, but I'd rather not.

The wheels are most certainly NOT a permanent addition. Just using them for a race this weekend, but goldang did they make this thing light.
R

Bumblebee said:
Thanks to everyone for their thoughts. You guys probably just saved me thousands of dollars.

Now all I have to find is shop stand so I have somewhere to build this thing.
Click to expand...