Long review: Last weekend I made the jump back to a FS 29er. I'm coming from a carbon Bronson 27.5/650b. Nothing wrong with the wheel size and the Bronson was the best overall bike I've ever owned.

I have owned several Specialized bikes previously and enjoyed all of them immensely: Two Enduro 26ers, two SX Trails and a Stumpy 29er. I do like Horst/FSR suspension, particularly for descending.

Anyway, I picked up the comp model from a local shop last Saturday for a bit more than $3,300 with tax. It's a size L; I'm 6'2 and 185 before gear. I ride in Arizona, so we don't have extended climbs and we don't have smooth climbs.

I basically tore the bike down to frame/headset/fork. Here's the build:

Complete stock weight when I brought it home: 32.4 pounds. Weight as shown with pedals: 30 pounds on the nose. 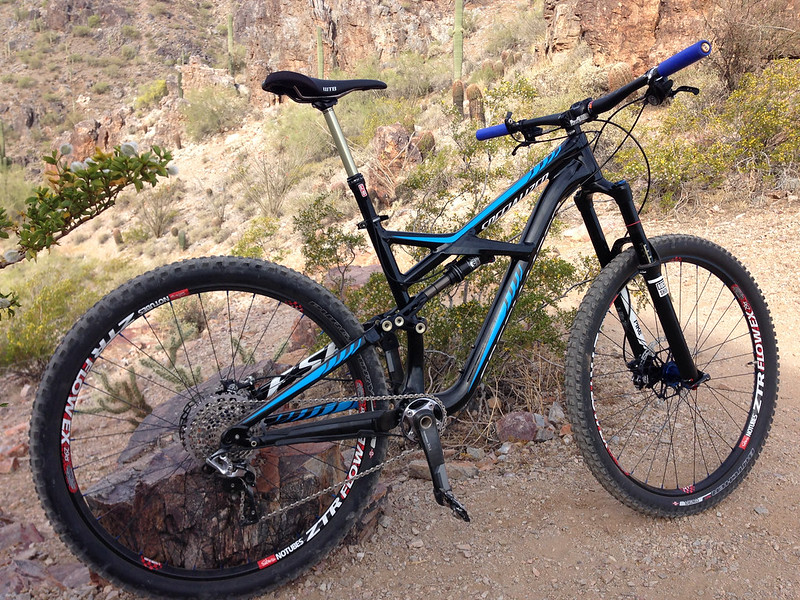 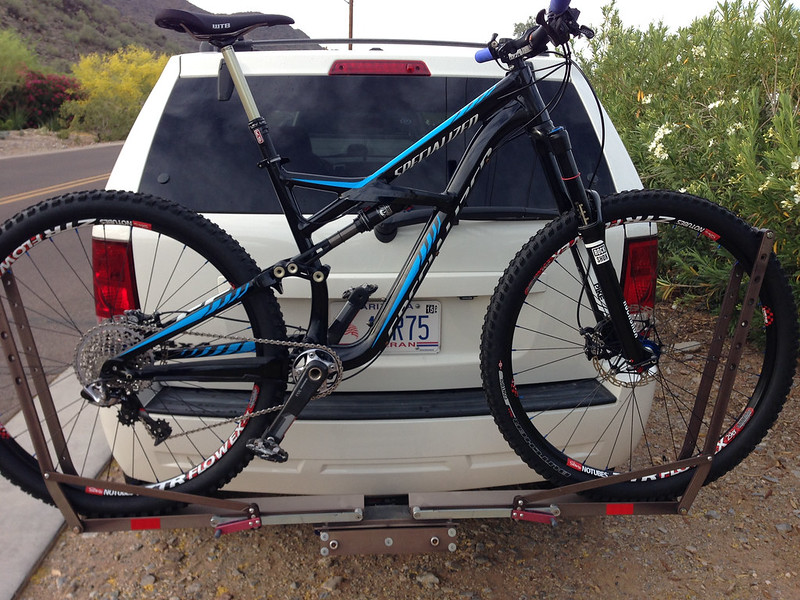 (On the truck arriving at the trailhead)

So far, I've gotten two rides in. Note: I've been riding a lot of SS lately; Saturday was my first FS ride in maybe three weeks.

Saturday was Phoenix Mountain Preserves. Extensive mildly technical climbing and some high-speed flow (for locals, T100 around to Lower Cheesegrater, up to VOAZ, down to the Chutes, back around T100 to the time trial run back to 40th Street lot).

Sunday was South Mountain. Up Javelina, up Mormon Loop, around to National, down National then back up onto Javelina and descend to the car.

The bike seems big when you're looking at it, but doesn't seem big at all when riding. I've read complaints of a tall front end. Mine measures 43 inches at the grips, which is exactly the same as most bigger-travel bikes I've built. The bike also seems heavy when you pick it up (although it's only 2 pounds heavier than my carbon Bronson), but pedals much lighter.

I've owned several bigger travel 29ers (Kona Satori, Rip9, Lenz Behemoth), but nothing this slack with this much travel. Seated pedaling it appears the entire front wheel is stuck way out in front of you visually.

To be honest, at my height, I could probably go either L or XL, but the XL just seemed really big. The L is a touch tight particularly in TT length.

Climbing performance: Make no mistake, this bike is not going to win any races to the top of the mountain. It's very slack and it's very plush. Also keep in mind, I don't like to use switches, so all my feedback is with the shock in descend mode. That said, this bike is likely the most efficient FSR bike I've ridden, easily as good a climber as my Stumpy 29er.

Not as efficient as, say, a multi-link suspension design (DW, VPP, etc.), particularly on smoother climbs. FSR, however, does shine on technical, ledgy climbs. In fact, over two days, I cleared three individual obstacles that I've only cleaned once or twice in years of riding.

The bike rewards mostly seated climbing with a smooth cadence. Yes, stand to shift weight to clear big obstacles, but if you're a stand-up masher or have a bunch of smooth fire road-type climbing, this bike might not be for you.

Descending: I've read this bike described as "game-changing." I haven't owned it long enough to make that statement, but I can certainly understand where it's coming from.

Bottom line, this thing is freaky fast. Scary fast and it gets there in a hurry. Make sure your brakes are dialed. I overcooked nearly every turn on my first ride.

It's very, very plush. Even considering a so-so shock, this bike is sweet. It's quiet and despite being plush it doesn't seem too squatty.

It really, really rewards aggressive riding, particularly in turns. With the short stays, you can really whip it into corners and the bike will respond. In super steeps, it responds well to weight-back hip steering. This is important for me, as many modern bikes tend to work better with your weight centered. I like to hang off the back and let the bike do its thing.

Mostly what I took away from a couple days of riding: This bike is really, really fast. No, really.

It's very much like riding a super-dialed 160mm AM 26er, but with the great rollover, contact patch and speed of a 29er.

Regrets? I really wanted the S-Works carbon frame from both a weight and aesthetics perspective. There's one available locally at a good price, but I wanted to be sure I would like the bike before I dropped that much coin.

Sorry for the long read; hope it's useful for someone.

Joined Jan 28, 2007
·
219 Posts
Your review is pretty much spot on with my own thoughts on this bike. It absolutely rips compared to my old Trek Fuel. It is so much fun to ride that I'm constantly thinking of the next ride.
1 - 3 of 3 Posts